IT IS with a sigh of relief we are now seeing musical theatre companies – the backbone of community theatre – coming out of hibernation after the dreaded lockdown to perform the big shows again. 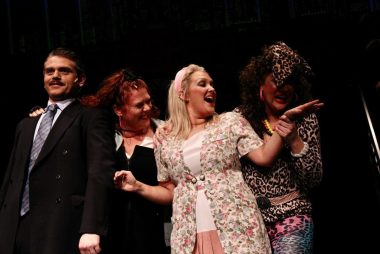 Remarkably, Bournville Musical Theatre Company has been ‘treading the boards’ for a 100 years with this production of Chad Beguelin’s ‘The Wedding Singer’ marking its centenary.

Even Performing throughout the war, BMTC had not missed a year since debuting with ‘Pirates of Penzance’ back in 1922 – until that is when all theatres went dark in March 2020.

BMTC are back ‘Puttin’ on that Ritz’ with a real powerhouse of a show , which is not only rocking it – it is absolutely socking it to packed houses at the Crescent Theatre this week.

Sadie Turner’s choreography is quite simply not only the best but the most imaginative I’ve seen from an amateur company in a very long time.

Turner’s chorus shimmy, glide, boogie and sassy on in well drilled troupes according to the tempo set by MD Chris Corcoran and his belting big band. 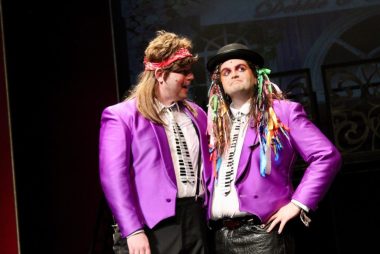 Turner has trained her guys and gals to move from fingertips to toenails. Hands up – my pet hate is watching a limp-limbed chorus line. Joy of joys -I did not see anyone putting a foot wrong all the way through to the walkdown.

My only gripe was with the sound cuing – far too often individual mics were not brought in on time. Sound cues should be learnt like a script and it is always better to be early than late.

The story of The Wedding Singer, is a take on the eternal star crossed lovers theme – in this case the incumbents are wedding singer Robbie, who gets dumped at the altar, and Julia, who is about to marry the Mr Rich and nasty – Glen.

There is bed-hopping, teeth-gnashing and soul searching a plenty – giving rise to some super songs and routines along the way to wedding bells and glitter balls.

Stuart McDiarmid is spot on the money as Robbie, charismatic and deft of voice, Chloe Turner makes a delightful Julia, sweetly spoken and smoothly sung. 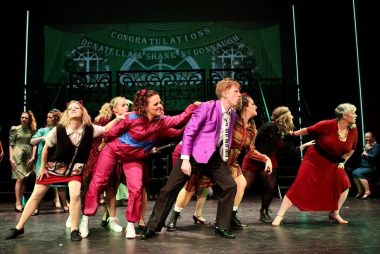 Liam McNally cuts the Versace pinstripe with all the panache of a lounge lizard as inside trader hotshot Glen.

All the principals galloped up to mark – that was Lewis Doley as Sammy, Lisa Calvin-Grieve as Holly, Robbie Love as George, Jill Hughes as Rosie and Sarah Frances McCarthy as Angie.

My stand-out tribute goes to Harriet Marsland as the sex kitten Linda. She’s the one that dumps Robbie at the altar.

The night before I reviewed ‘Waitress’, which contains one of the raunchiest numbers in it I have ever seen, then here we are the night after and here’s Marsland doing a routine to rival it in its naughtiness whilst making a magnificent job of singing ‘Let me Come Home’.

It is a bit like when we used to say: “We wait all day for a number 8 two come along at once”.

John Morrison has directed his show to flow seamlessly creating some memorable moments on the journey.

The talented BMTC are back doing what they do best -bringing joy to the theatre – at the curtain both the audience and the bar tills shared the love.

The Wedding Singer runs at Birmingham’s Crescent Theatre until Saturday, May 21. Click here for times, tickets and more information.