TO BE honest I’ve never really been excited by the literary works of Jane Austen.

I tried watching her ‘Sanditon’ currently showing on television but gave up halfway through the first episode. 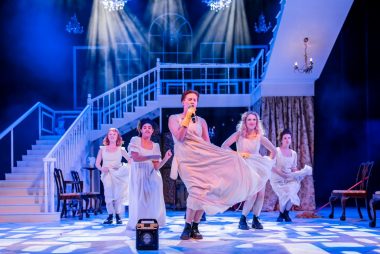 I know ‘Pride and Prejudice’ is regarded as one of Britain’s best-loved books and I’ve tried to read it – honestly! – Because I felt I should, at least once a decade for the past 50 years but never completed the mission.

I have however seen the 2005 film version starring Keira Knightly and Mathew Macfadyen  so I know the story is about Mr Bennett’s five little girls who can’t inherit the estate because they’re not chaps!

They must therefore: ‘marry well’.

I don’t know what I was expecting from this co-production between ‘The Royal Lyceum’,’Tron Theatre’, ‘Blood of the Young’, ‘Birmingham REP’, ‘Bristol Old Vic’, ‘Leeds Playhouse’, ‘Northern Stage’, ‘Nuffield Southampton’ and ‘Oxford Playhouse’ (phew!) but with such a list of theatrical royalty it had to be something special – and indeed it was! 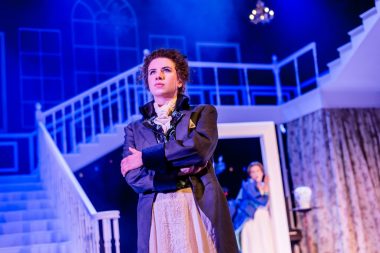 Writer and adapter Isobel McArthur gripped me with her version where Jane Austen failed.

The ‘sort of’ in the title is all embracing really.

It’s ‘sort of’ the original story – I was told by eminent Austen aficionados that nothing is left out – ‘sort of’ a musical – but not really, more a ‘sort of’ clever karaoke, ‘sort of’ an upstairs-downstairs comedy bordering on farce and yes, ‘sort-of’ a period drama brought bang up to date.

McArthur also appears as one of the magnificent cast of six women who multi-task and gender to create an evening of pure magic with a little madness and much mayhem. She is joined by Tori Burgess, Felixe Forde, Christina Gordon, Hannah Jarrett-Scott and Meghan Tyler – all of them offering up an equal amount of talent, energy and pure cheek with a Scottish accent. 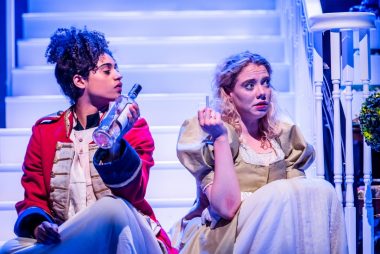 Paul Brotherston obviously enjoyed directing this wondrous romp – there are so many clever moments, so much humour and – where  necessary – poignancy.

You can feel the skilled hand of a craftmaster at work gently sewing together the ideas and talents of this inclusive and collective all-female company.

Being in the audience was almost like being invited to a private party where everyone’s got interesting stories to tell – there is even one point when we are asked: “Are we all OK for drinks?”

Jane Austen was a spirited lady – I’m sure she would approve of McArthur’s hilarious 21st century take. 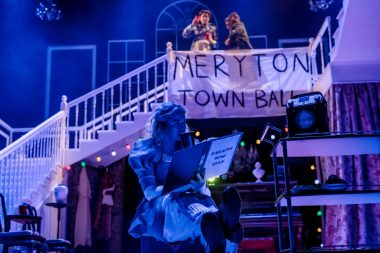 Despite all the humour the voices are strong and cleverly turn the tables on historic male dominance, with a nod to feminism whilst offering a big shout out to equality.

This ‘Pride & Prejudice’ is not ‘sort of’ but definitely bold, innovative and infectiously entertaining.

Pride & Prejudice* (*Sort Of) runs at the Birmingham Rep until November 2.