THE TRAGIC story of star-crossed lovers Romeo and Juliet has seen many versions over the centuries.

Of course the most famous is William Shakespeare’s play, (which itself was based on a 16th century poem), but this New Adventures production will surely rank as a new classic. It will surely come to rank alongside Bernstein’s West Side Story, the Franco Zeffirelli film and the  Kenneth Macmillan ballet created for Nureyev and Fonteyn.

Like Macmillan, Matthew Bourne uses the evocative Prokofiev score as inspiration, but Bourne’s is a very different interpretation – one which puts the teenage angst of the protagonists at its heart. 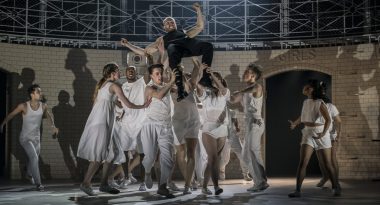 Set in the ‘Verona Institute’ – a detention centre for troubled youths – this stark, clinical design by long-time Bourne collaborator Lez Brotherston with its prison-like walkways and barred doors brilliantly conveys the bleakness of the situation the teenagers find themselves trapped in.

Here, every aspect of the lives of the inmates is controlled by nurses and wardens – illustrated by the unrelenting, twisted, disjointed movements. One warden, Tybalt, (a menacing Danny Reubens) uses his power to take advantage of the young women, always selecting a different girl to sate his sexual desires.

He chooses Juliet as his latest victim. Their dance is an uncomfortable watch as Juliet tries unsuccessfully to escape his clutches.

Seren Williams as Juliet brings just the right amount of innocence, angst and feistiness to the role.

Enter Romeo (a dashing, innocent-at-large Andy Monaghan)– deposited at the Institute by his powerful parents, the Montagues (Mrs Montague is portrayed as a Teresa May lookalike) – who clearly have no understanding and little time for their troublesome son.

In a humorous scene Romeo is gently teased and shown the ropes of life in the institution by the streetwise trio of Mercutio, Benvolio and Balthasar. 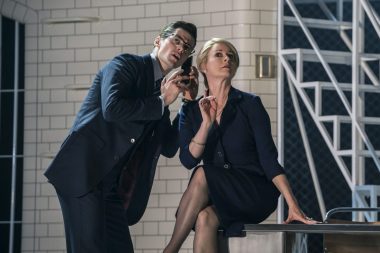 The only brightness in the gloom for the inmates are the dances held by the hapless, do-gooding Chaplain, Revd Bernadette – an engaging, funny portrayal by Madeleine Brennan which brings some welcome humour. The inmates dance with mechanical, stilted movements under the watchful eyes of Guard Tybalt, but once he leaves, they become uninhibited – think school disco when the teachers have left!

Here Romeo and Juliet first set eyes on each other and there follows a pas-de-deux which beautifully captures the innocence and clumsiness of teenage first love – all snogging, fumbling and writhing.

But Tybalt still has Juliet in his sights and continues to exert his power over the troubled youngsters, culminating in a heart-stopping fight scene, danced with such precision, fear and ferocity that you are on the edge of your seat.

No spoilers as to who kills whom, but the spiral of despair and mental anguish is about to escalate, as the lovers are isolated. Juliet begs the Reverend to help her see Romeo again and she agrees, taking Juliet to his cell. There is less innocence and more sexual tension in this pas de deux as they are re-united, but for Juliet the sexual assaults inflicted by Tybalt cannot be forgotten and her mental anguish is painful to watch.

The ending is, as we’d always known it would be, truly tragic and brilliant in its execution.

Bourne’s productions are built on precision from his dancers and this is no exception. The performances  throughout were faultless – the exertion and passion palpable and utterly compelling. What is even more brilliant is Bourne’s commitment to bringing on new talent – five of the creative team are trainees, and in every tour venue the company are working with six young local dancers aged 16-19, who are inserted into the cast so seamlessly that you can’t see the join. They rightfully got the biggest cheer of the well-deserved standing ovation.

This is a production that every parent of teenagers – and every teenager – should see.

The final performance of Matthew Bourne’s Romeo and Juliet take place at the Hippodrome tonight and tomorrow (Friday and Saturday, September 13 and 14).

Click here for more information, times and tickets, which start at £40.50.