AN ATMOSPHERE of celebration, as well as the usual Christmas spirit, filled Dodford Village Hall when the Dodders performed their 40th anniversary pantomime.

Cinderella was the first panto the group had staged so it was fitting the classic rags to riches tale returned for this magnificent milestone.

The majority of the laughs on the afternoon fell to Hit and Run, played by Chris Hall and James Cartwright, as the pair appeared as bailiffs, Cornetto selling Italian waiters in a scene reminiscent of Fawlty Towers and as French foot doctors. Every scene they were involved in earned plenty of chuckles or laugh out loud moments. 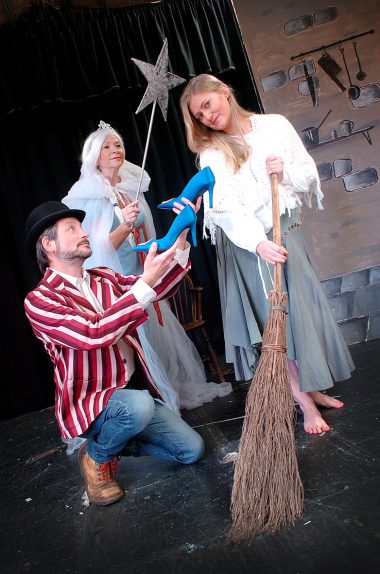 The two ugly sisters Lateitia and Lil, aka Scott Broadfield and Chris Hinchley, clearly relished their roles and had some great interactive moments with the crowd and Harriet Crump and Sharon Cartwright worked well together as best friends Prince Charming and Dandini.

A special shout-out also has to go to Josh Dawson and George Bryan who did a fantastic job manoeuvring – and at one point dancing – Lightning the wonder horse.

Matinees for some reason always seem to prove a challenge for panto casts – I don’t know whether we feel more in the mood for pantomime in the evenings or whether the often younger crowd takes some convincing before it chooses to get involved.

But the players rose to the task and whipped the crowd up into a frenzy – most notably Phil Stuart as Buttons who worked tirelessly to get responses from the seemingly sleepy audience.

Clementine Kear was a sound Cinderella who the audience took to their hearts – the scene to take us into the interval with the carriage travelling up the aisle was a lovely moment.

There is always a fantastic community feel about the Dodders’ annual festive offering and the 40th anniversary brought that out even more.

Panto crowds love a happy ending but hopefully this production was just the beginning – especially for the wealth of young talent on show in the chorus and dancing ranks.

Remote working: Where to set up desk space overseas