AS WE come out of lockdown and the beginning of the end of artistic darkness forced on us by ‘that virus’, I am revelling in my privileged position as a reviewer, witnessing the rebirth of live theatre.

This night was even better as it heralded the launch of a brand new performance space as well – The Prince of Wales Pub Theatre in Moseley, Birmingham. 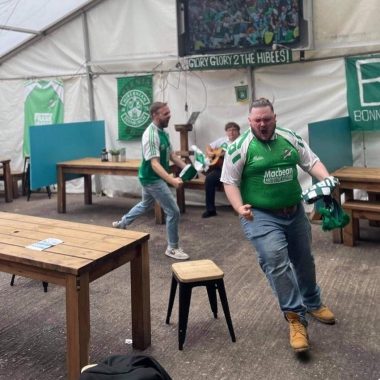 All credit to joint-impresarios Becky Jones-Owen and POW general manger Sterling Archer on this welcome initiative. Sterling? Where have I heard that name before? Ah yes, a chap doing rather well for our national football team at the moment. Ironic, then, that this first show  ‘1902’ is all about football.

It is a play about four Hibernian football fans who have tickets to the 2016 Scottish Cup Final to see their team play Glasgow Rangers  – 1902 in the title being the last time Hibs beat  Rangers.

This is though a play that uses football merely as one level of a piece which takes the audience on a 75-minute roller-coaster ride.

It all kicks off when his chums find that Derek ‘Deeks’ Longstaff  (Nathan Scott-Dunn) has borrowed £1,000 from local long shark and sadist Samuel ‘Sambo’ Donaldson (Gregor Copeland) to pay for their match tickets – without a plan B of how to pay it back. Scott-Dunn (who also wrote the play) and Copeland give superlative adrenalin-driven performances amongst a cast that exudes energy and dynamism with every word and gesture. 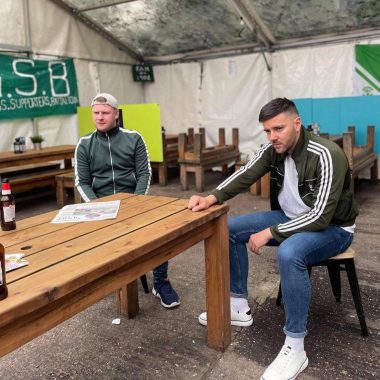 The final member of the company is Ella Stokes who turns in a stellar performance as Bonnyrigg barmaid Margaret ‘Mags’ Evesham – a silent observer for the first third of the show until she explodes like a demented Jack-in-a-box that jumps right out of the box and proceeds to wreak havoc on all in her path. Her decking of Tony with a tin tray was iconic moment to savour.

A special shout out too for Sandy Bain, who links things together with his guitar-playing and vocal work.

There are many twists and turns in ‘1902’ ending in a stunning kick-by-kick, goal-by-goal narration of the legendary match itself.

This is an inspired piece of theatre, beautifully crafted by the writer and passionately performed by a flawless company. The setting is perfect – we are locked in a ‘wee pub’ ironically within a real pub.

It’s a bold and brash and I cannot recommend it highly enough, grab a ticket if you can.

1902 by The Saltire Sky Theatre Company runs until Friday, July 8.