KAY MELLOR is renowned as a powerhouse writer who has brought gritty, northern humour to stage and screen for quite a few decades.

Her TV series ‘Band of Gold’ was watched by millions back in the 1990s and now, a quarter of a century later, she has revisited her much-loved  Bradford sex-workers in a stage version. 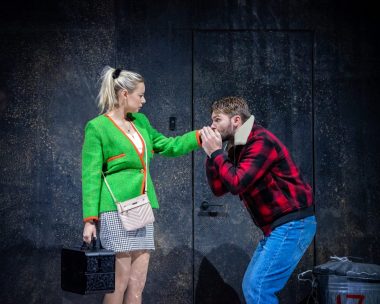 The cast comprise ‘soap royalty’ and the audience had come to pay homage to their heroes from Eastenders, Coronation Street, Emmerdale and Hollyoaks – plus X Factor winner Shayne Ward thrown for good measure.

‘Anita’ is the mature hooker-come-pub-singer, who at the start of the play is only ‘doing’ one chap – her married, overweight boyfriend who pays her rent and furnishes her flat in return for sex.

On press night, Anita was played by Virginia Byron, standing in for the indisposed Laurie Brett – ‘Jane Beale’ from Eastenders. 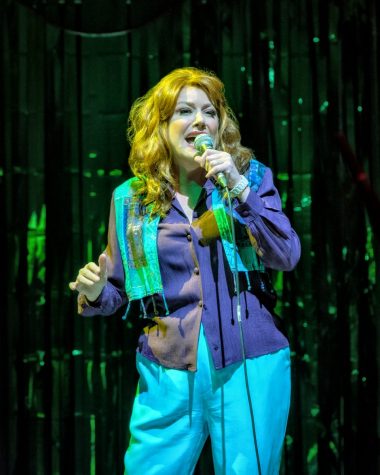 Other ladies of the band of gold are ‘Carol’, the house proud mum who dispenses bleach and sex in equal quantities – though thankfully not at the same time – and is played with humour and gusto by Emma Osman, Gaynor Faye – Emmerdales’s Megan Marcey and Kay Mellor’s real life daughter – is ‘Rose’, the tough Queen Mother of the patch, to whom all who work ‘The Lane’ must pay a street tax, completing the line-up is Sacha Parkinson as Gina who takes up the oldest profession after failing to make enough as an Avon Lady to pay off a nasty loan shark.

Olwen May plays  Carol’s mother ‘Joyce’ and steals the female acting honours for me by bringing in an extra touch of realism to her role.

There are some familiar names and faces on the male side too, Hollyoak’s Kieron Richardson plays Carol’s abusive ex-husband Steve with a whisky bottle permanently in his right hand, Coronation Street’s Andrew Dunn plays the seemingly nice guy, Councillor Ian Barraclough, whilst two more ex-Corrie chaps Mark Sheals and Steve Garti play Anita’s misogynistic provider and Curly the chicken farmer with a foot fetish and a bad rash. 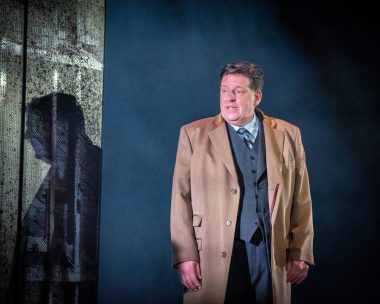 In addition there are very strong male performances from newcomer Joe Mallalieu as the menacing loan shark Mr Moore and the said X-Factor star Shayne Ward in the small but memorable role of Inspector Newall, the caring copper.

Kay Mellor directed as well as wrote the drama, which has more of a screen than stage feel about it,  comprising of a myriad of small scenes moving from a variety of flats to a karaoke pub, street corners and other places. So fast in fact that there is little time for character development or to become engaged in the storyline other than superficially.

I realise these are a cast more used to being mic’d than having to project, but so loud were the radio mics they wore that it was like listening to a TV set on full blast for the hard of hearing.

This coupled with deafening music destroyed any chance of subtlety. A fight scene went badly awry but that may have been a one-off and down to the enforced cast changes.

The set by talented designer Janet Bird involve the use of sliding dark semi-transparent flats/legs to create an atmosphere of street corner seediness.

This brings a degree of order to the almost constant cacophony of location changes. However, the sparseness of the furnishings doesn’t quite work sympathetically in the overall concept.

Fine when you’re cutting from scene to scene on film, but jarring when it’s  got to be done practically on stage – makes for switching off, not tuning in.

There is no doubt that Kay Mellor is a huge talent and she has assembled quite a formidable team for this production.

For me though, it is lacking in detail and is not a joined-up stand-alone drama.