Lovely Bones formed in Brum will run and run

THE LOVELY Bones is based on true events about 14-year-old Susie Salmon just entering her prime and having her rite of passage denied by being hideously raped and murdered.

This may sound about as bleak an evening at the theatre as is possible to envisage, but I assure you it’s not – it’ll take you through a whole gamut of emotions from sadness through to rage but with plenty of laughs and smiles along the way.

Alice Sebold’s 2002 novel was heralded as a literary sensation – usually that means that any play or film will be a disappointment to her literary fans. 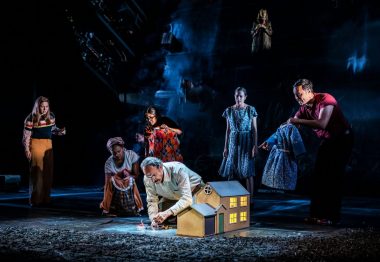 Not so here – this fast-moving adaptation by Bryony Lavery is a triumph that encompasses all that is wonderful about the book, whilst adding her own layers of theatrical magic. It is cleverly directed by Melly Still with a magnificent score by composer Dave Price and lighting designed to offer up shock and awe by Matt Haskins.

The story is narrated by Susie Salmon herself, a delightfully sparkling ‘Tinkerbelle’ like performance from Charlotte Beaumont who, following her murder, watches over her family and friends in a celestial stroppy teenager manner from some version of a heaven.

Susan of course wants them to bring justice to her murderer Mr Harvey, a suitably skin-crawling performance from Nicholas Khan who oozes obsequiousness from every pore.

We, the audience, know he is guilty of course as we watched him do it.

Everyone suspects his guilt but so cleverly has he covered his tracks that all that is left of Susie to discover is her elbow.

Susie is not his only victim – Mr Harvey is a serial killer. 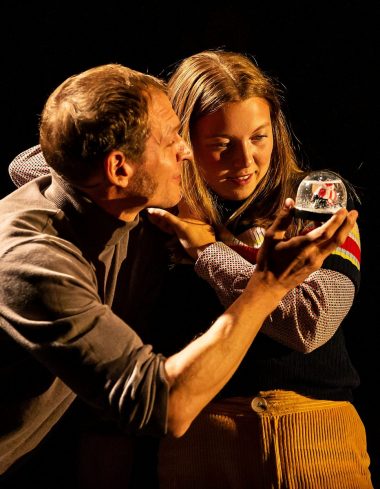 The number of poor young girls he has robbed of their precious years is shown in one of the heaven scenes where the other victims make themselves known to Susie by way of a macabre gathering.

Susie tries to reach out to her grief stricken father Jack Salmon – a quite-rightly intense performance from Jack Sandle – as he descends into depression and isolation. This in turn leads to sexual betrayal from Susie’s mother Abigail – a very believable Catrin Aaron.

Fanta Barrie as Susie’s sister Lindsey shows great emotion in dealing with her own loneliness and guilt and Samuel Gosrani excels as Susie’s school crush Ray.

The rest of the company play numerous roles with synergy and energy.

What makes this complex tale so easy to follow is the ingenious set by Ana Ines Jabares-Pita, which features a huge tilted mirror that moves to allow different locations to be displayed simultaneously.

For instance, we see Harvey cleaning up blood in his death pit whilst the Salmon family are being told Susie’s disappearance is now being treated as murder. Likewise, Susie’s reflective scenes in heaven happen simultaneously with normal events in the real world.

This is cutting edge theatre presentation at its sharpest whilst retaining the heart of a powerful and shocking story.

Originally commissioned by the REP this production is now about to go on tour.

I hope it proves as successful for them as their other classic ‘The Snowman’.

Personally I believe it will run and run thrilling new audiences around the world for many years to come.

The Lovely Bones is on at the Birmingham Rep House until September 21.