Judging by Nell, Brum's Crescent could be onto a Gwynner with its new season

JESSICA Swale’s Nell Gwynn is a gem of a show to kick off the new Crescent Theatre season with and my word they do her justice.

Sumptuous cossies, a set to transport you to ‘The famous Globe’ of old London town and music from Christopher Arnold to grace any royal parlour – and that’s before we get on to talking about the acting. 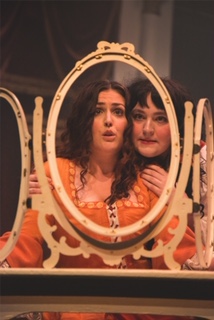 At approaching three hours long, dear Nell could have been an endurance test, even for the theatre faithful. But there is so much crammed in here to relish that you’re left rather begging for more not screaming for mercy.

The play is set after the death of Oliver Cromwell where 30 year old King Charles II comes has returned from exile in France to grace the throne once more.

The story is not just about lovely orange-selling, part time hooker Nell, but concerns theatre and theatrical folk. It’s the game-changing time when women were first allowed to grace the stage as actors –Heaven forbid this step should cascade them into being allowed to vote and workplace equality!

No this is the time when women ruled with the power of sex and cunning whilst men just thought they ruled and enjoyed the sex.

We meet a company of actors struggling to put on performances in the Kings’ own theatre – artistry must be tempered with political correctness but whatever happens – the show must go on! 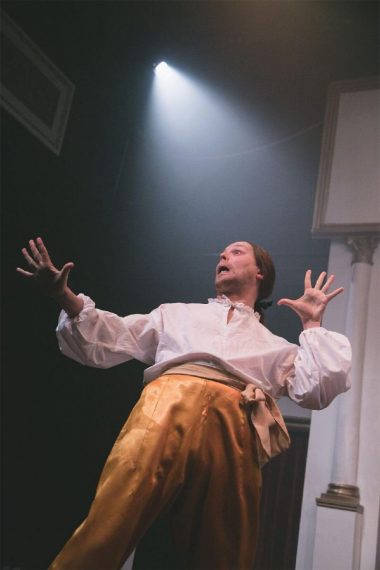 Laura Poyner is our hardworking Nell – she rarely leaves the stage as she acts, sings, and cavorts her way into our hearts. In a dress as bright as the oranges in her basket she is simply joyous with a performance that sucks you in and keeps you there until her final epilogue.

Alice Macklin puts in fine support as Nell’s sister Rose, Pat Dixon is as delightful as she is funny as Nancy, Jaz Davison gives up a delicious double as Charles’s wife, Queen Catherine (if any of you have seen the series ‘Get Shorty’ then think the Mexican Cartel boss lady) and sad Old Ma Gwynn, Nell’s brothel keeping mater.

Joanne Brookes completes the main cast female line in another splendid double as we get two mistresses for the price of one – the hissing court bitch Lady Castlemaine and the clever French beauty Louise de Keroualle.

There is not a weak link in this cast – on to the males -Tom Fitzpatrick smiles majestically just like the picture that adorns so many pub walls as King Charles II’ all that’s missing is the spaniel on his lap – a perfect piece of casting,

Sam Wilson is gloriously outrageous as Edward Kynaston, the member of the company who got to don the frock and the face slap before Nelly takes over, Graeme Braidwood is a suitable harassed writer John Drydon, Alan Bull brings the right amount of bluster to Lord Arlington and Luke Plimmer as Ned Spiggett and Christopher Arnold as Henry Purcell also put in solid performances as actors playing actors. 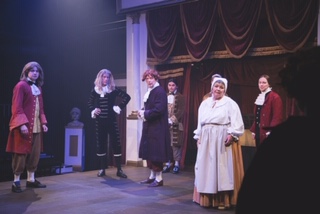 Two special shout-outs firstly for Mark Payne as the lead actor of the King’s theatre troupe Charles Hart – he manages to demonstrate the whole range of acting skills when teaching Nell how to act  – whilst masking it in another layer of what Hart is really thinking –no mean feat for an actor playing an actor showing another actor how to act – if you follow my drift?

Secondly to a truly extraordinary outing for Andrew Cowie as Thomas Killgrew the company director. He is so funny, so believable and so intense – I can’t find sufficient superlatives. – ‘cept perhaps to say Bill Nighy (whom Cowie really resembles) couldn’t have done it better. 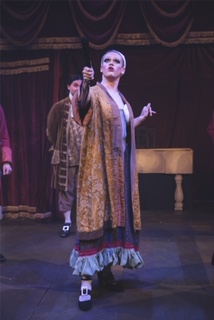 Sometimes there is nothing as real as pretense – Killgrew’s uproarious rehearsal room scenes are spot on and timeless. Within those walls plans are hatched, hearts joined and broken; dreams made and shattered – Viva la suspension of disbelief.

Of course all this would never have come to pass if there wasn’t a real director with a vision – Dewi Johnson take a well-earned bow. It didn’t escape my notice that the actors never stopped acting and muttering even when moving the scenery. The company did you proud and you welded them into one hell of a team.

Standards for the season have been set!

Nell Gwyn runs at The Crescent until Saturday.