EVERY TIME I see a Matthew Bourne production, there is a small part of me that wonders how he can possibly top his previous show.

After more than 20 years of choreographing spectacular ground-breaking ballets, how can he find a way of engaging us and taking the genre to new heights?

I’m happy to say that The Red Shoes does not disappoint – hooking the audience from the moment the curtain opens and keeping us on the edge of our seats right up to the collective audience ‘gasp’ of the final scene. 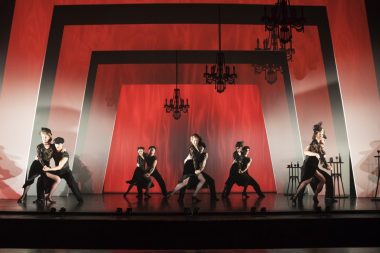 The story is based on the classic 1948 film by Pressburger and Powell, which starred Moira Shearer as the dancer who coveted the red ballet shoes only to find that once on her feet, she could not stop dancing, eventually sending her into a spiral of despair.

The original Hans Christian Anderson story is typically gruesome in its ending and this production manages to retain the shock-factor too.

The cinematic surrealism perfectly reflects the film and the characters are beautifully drawn with their movements instantly conveying their personalities.

This is a true ensemble production – with every dancer giving their all and not one superfluous or out-of-sync step. 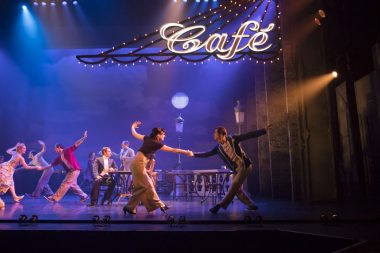 The action largely takes place in a ballet theatre switching seamlessly between on-stage and back-stage through the ingenious set (from long-time Bourne collaborator Lez Brotherston) which includes a suspended proscenium arch that glides and pirouettes almost as much as the dancers below.

Add to that the subtle, pin-point accurate lighting by Paule Constable and Brotherston’s stylistic costumes and the whole show is visually stunning.

The evocative music score has been assembled from film music of the era written by Bernard Herrmann, most notably his orchestral scores for Farenheit 541 and Citizen Kane which adds to the filmic quality.

Interestingly, as Matthew Bourne explained in the Q&A that followed the show, the cast rotate in the roles, so that in one show they could be playing a principal role and the next be part of the corps-de-ballet.

This helps to keep performances fresh and constantly evolving.

or this reason, I am not ‘naming-names’, instead referring to the characters in the story. 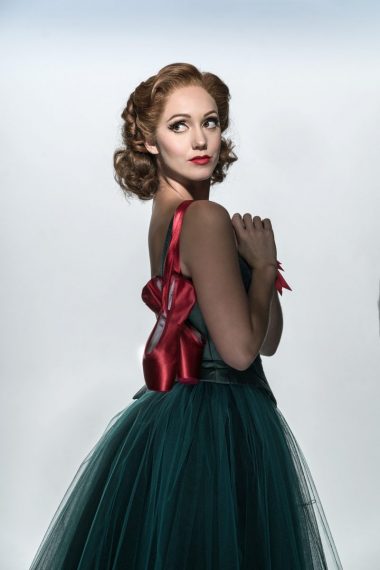 Vicky Page is the girl who dreams of a career as a ballet dancer and eventually is spotted by ballet impresario Lemontov, who becomes besotted with her. He takes her into his ballet company, along with her boyfriend, Julian Craster a struggling composer, who is writing the score for a new ballet ‘The Red Shoes’, inspired by Vicky.

‘Vicky’ is sublime – dancing with a passion and intensity that both delights and awes.

Lemontov is suitably controlling whilst Craster perfectly conveys the angst of the struggling artist.

There is plenty of humour to lighten the intensity – from cameos within ballet chorus, a delightful seaside scene when Lemontov’s company arrives in Monte Carlo, to the hilariously seedy music hall dance act that Vicky is forced to perform with when she leaves Lemontov in pursuit of love.

The ‘Red Shoes’ ballet-within-a-ballet that Craster has created for Vicky is simply stunning; the set transforms to stark black and white giving a film noir feel.

The devil that offers Vicky the red shoes is suitably slimy and menacing, the ‘storm’ scene as she descends into madness breath-taking and the pas-de-deux she dances with her lover from beyond the grave totally heart-breaking.

Matthew Bourne ensures he is in the audience for every first night on a tour – with that level of commitment and attention to detail and there is no danger of the show ever getting stale.

It is heart-warming to see a capacity audience enjoying ballet on a wet Tuesday night in Brum – bravo to Matthew Bourne and his New Adventures Company for making ballet so accessible without compromising on artistic integrity.