THE REP is the last theatre on my reviewing journey to open up again after lockdown and it was great to be back in their huge raked auditorium once again taking in the buzz of a full house press night.

Having said that, the front of house is in the midst of a major refurbishment and so the route from door to theatre was like walking through a boarded up building site. in mitigation no construction was of course allowed for much of the lockdown, but they need to get on with it now if they want to have happy returning audiences.

East is East started life in the REP studio back in 1996 and so that’s a good link to why it’s enjoying it’s silver anniversary revival back where it started.

Ayub Khan Din’s script must have had far more impact back then, dealing as it does with mixed race marriage and the problems this caused both with family and in society in general. Director Iqbal Khan ups the stakes with some quite shocking scenes of domestic abuse, which were only hinted at in the original. 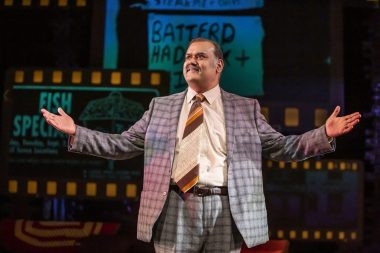 The story takes place in the streets of 1971 Salford. Bretta Gerecke’s set design sprawls out across the huge REP stage, unfortunately making the Khan home appear more of a tacky stately home than a ‘Hovis ad’ terraced house. Gerecke fills it with a mish-mash of tasteless furniture – giving it the persona of an Asian  Steptoe and Son – or, in the case of the Khan and Sons!

Whilst to me the set just doesn’t work in the space, however the clever use of projection screens as a method of story telling between scenes, works very well indeed.

The cast is strong all round – led by an outstanding performance from Tony Jayawardena as George, the ‘Big Daddy’ of the house.  He wants his children raised the traditional Muslim Pakistani way, including arranged marriages, but the rest of the family have other ideas. 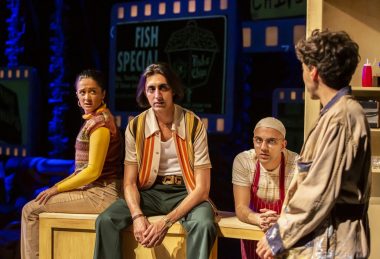 Jayawardena’s vocal projection was a joy in a production where many lines from other characters were lost in the cavernous auditorium. This is not a new problem, those of us that know the theatre well are aware of the number of dreaded dead spots when it comes to audibility. Such a pity and although it may go against the theatrical grain, I am sure I was not alone in wishing on this occasion it had been a little mic – enhanced.

Sophie Stanton was warm and compelling as George’s white wife Ella. A special shout out too for Noah Manzoor as the effervescent Sajit – but good as he is, he’s actually upstaged by his ever-present grimy old parka. 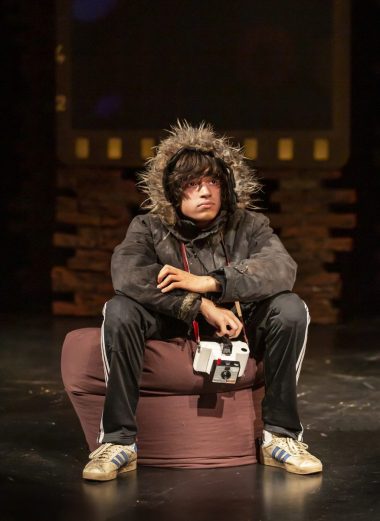 It’s wonderful to have the REP’s doors open again and this joint National Theatre/REP production has much to commend it as the season curtain raiser.

Next, I look forward to seeing a wide diversity of theatre, including new work from the artistic director Sean Foley. Like the refurbishment, his plans have had to be put on hold for too long.

East is East runs at the Birmingham REP until September 25.