THERE was a great atmosphere at the Wolverhampton Grand as the official opening night also marked 125 years to the day the theatre first opened its doors.

The Grand really is quite a gem of a theatre, splenderously appointed, warm and welcoming and home to some wonderful productions.

‘Dick Whittington’ is splenderously staged by Qdos Entertainment, with one lavish set after another appearing – it was like gazing down a kaleidoscope and quite rightly, accompanied by an equally lush, never-ending parade of frocks. 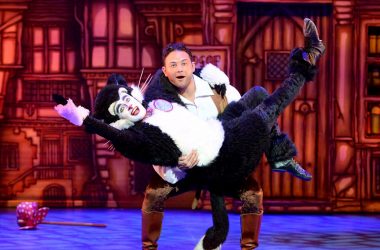 The script by pantomime legend Ian Adams contains the right mix of cheese, cheek and schmaltz with plenty of audience participation. Hard-working Adams also not wrote the piece, but also directed and played the traditional panto dame of ‘Sarah the Cook’.

The cast of stalwarts, many of who struggled admirably with seasonal sore throats included bewitching Julie Paton as Fairy Bow Bells (she also choreographed the show), the luscious Katie Marie-Carter as Alice Fitzwarren, the girl Dick loses his heart to, Jordon Ginger making a posh feline out of Dick’s sidekick Tommy the Cat and Tom Roberts brings oriental delight to his role as ‘The Sultan.’ 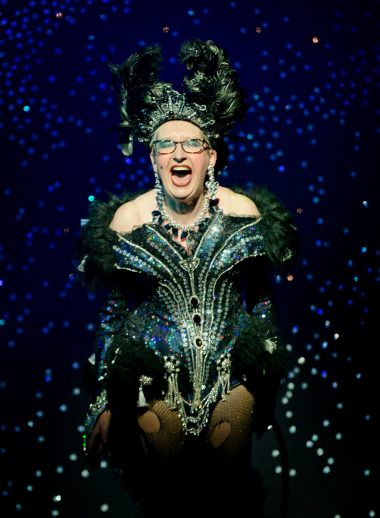 This quartet is joined by the very engaging Aaron James as Idle Jack and Coronation Street star Ryan Thomas, as the wannabe mayor himself Dick Whittington. Plus a  spot on spiffing Su Pollard as Queen Rat who it was nice to see reunited with her old Hi-De-Hi pal Jeffery Holland who rejoiced in the role of Alderman Fitzwarren.

An energetic ensemble join the principals as does engaging teams of tots from the Willenhall based, Classic Academy of Dance.

The very capable Grand Theatre Orchestra is under the glorious baton of Kelvin Towse.

There are some wonderful moments on offer, great songs, hard core slapstick,  an amazing hand clapping/ jiving routine plus a truly scary giant rat that looms its fangs out over the stalls.

If you’re looking for a truly traditional pantomime to put a mince-pie warm glow in your veins then ‘Don’t look behind you’ rather look across to Wolverhampton where you’ll find a grand show awaiting.

Dick Whittington is on at the Wolverhampton Grand until January 12.