THE VICAR of Dibley remains one of the most loved TV sitcoms of all time even though, apart from a few Christmas specials, it ceased running on the BBC as a series back in 1998.

At the time it was conceived by Richard Curtis and Paul Meyhew-Archer, it was highly topical, following hot on the heels of the first ordination of women vicars into the Church of England. 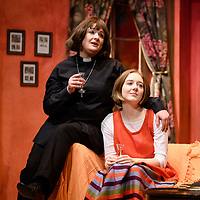 It was written for Dawn French who became synonymous with the role and also starred the late Emma Chambers who won best TV comedy actress for her portrayal as French’s assistant verger, Alice Tinker.

Add to these two a cast of characters as clearly defined and much loved as those in ‘Dad’s Army,’ following in these hallowed footsteps in a stage version is indeed a very hard act to follow. 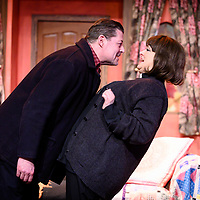 I am delighted to say director and script adapter Kevin Middleton pulls it off quite admirably – paying homage by making all the characters copies of the original, piecing together a script of the best loved moments and creating a one-ness with it all by linking it with a whacky choir.

Keith Harris’ set design of two distinct acting areas – the parish hall meeting room stage right and the vicars home stage left – works quite beautifully and linking them with a third area created by flying in the tab and a stained glass window on the apron ensures that the action is seamless.

On the acting front, into those giant ecclesiastical shoes steps Katie Merriman as said female Dibley vicar Geraldine Granger. Happily they fit like Cinderella’s glass stilettos – she is chirpy, quirky, cuddly and comforting from the moment she walks on stage through to the final curtain. 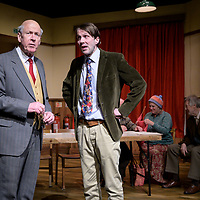 A special shout to the magnificent ensemble choir featuring a rare, reluctant singing stage appearance for Crescent’s resident musical director Gary Spruce – two child soloists raising a smile in Anastasia Bridgewater and Brady Honeyghan and a doff of the cap to the show-stealing cameo from Christopher Arnold as the baton-waving drag-race-perfect guide to coarse acting choirmaster.

I am sure the company will make allowances for laughter pauses having witnessed their first night response and also raise their rehearsal room audibility to hit the back row of the main house as performance confidence kicks in.

This is a fine company, another great Crescent show, VoD devotees get what they hope for and newbees will be instant converts. Tickets for this production at Birmingham’s Crescent Theatre are scarce  – chase them with haste.

The show runs until next Saturday, February 1.