Evening of magic and mirth with Crescent's Pygmalion at Harvington Hall

THIS OUTDOOR production of George Bernard Shaw’s Pygmalion by The Crescent was a night of blessings and none of them mixed – just an abundance of delights. 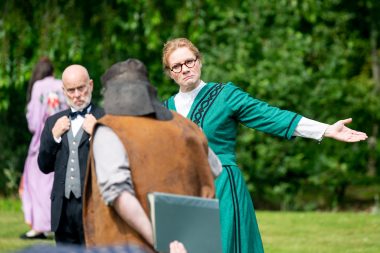 Take the venue on this leg of the tour, ‘Harvington Hall’ near Chaddesley Corbett – a jewel of moated house with walled gardens and secret passages. To think I’d passed the sign oodles of times but never ventured down the lane before. I shall most certainly return to explore the mysteries of the house itself.

I have said many times over the last few weeks that my job as a reviewer has allowed me the joy of sharing with casts and audiences the emergence of post-lockdown theatre and this was another first – an unmasked audience in the open air. How wonderful to observe audiences expressions and to hear unmuffled laughter.

To sit and enjoy a glass of wine and a Cromer Crab pre-show was also a hedonistic treat. 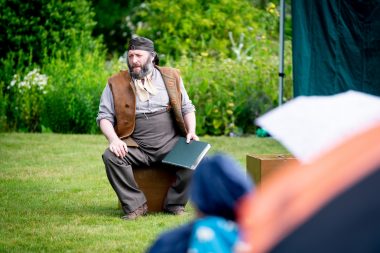 The company entered through an arch of tumbling roses and for all intents and purposes the years melted away like being in a time warp.

In the opening scene, the unwashed laughed and tried to turn a coin from the gentry who in turn were seeking taxicabs to whisk them away to their world of privilege.

Thankfully the vendors didn’t break into an opening chorus of ‘Loverly’ – Pygmalion is of course Shaw’s original song-free tale of flower girl Eliza Doolittle’s journey from gutter to manor and vulgarity to elegance.

Director James David Knapp has drilled his troupe well in the art of outdoor performance – everything a little bigger. a shake of the head rather than a roll of the eye and above all else aim your voice at the back row and beyond. 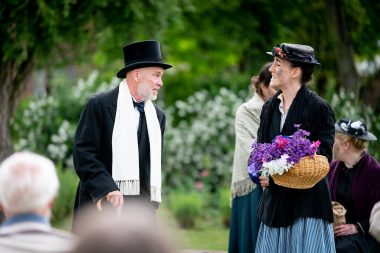 Basics established, now Knapp can let rip with the players telling the tale. The furniture is stripped to bare bones of a few representational boxes and the odd hand prop – but costume designer Stewart Snape bedecks Knapp’s production splendidly in a never-ending bevy of delightful frocks.

Naomi Jacobs plays Eliza Doolittle full pelt from the off – taking no prisoners. Her wails, whines and slovenly posture are a veritable, one-level assault on the senses. Mercifully the flower seller undergoes an early make over.  Jacobs is as delightful once her diction and deportment are perfect, as she was annoying pre-transition.

Skye Witney is quietly commanding as Mrs Higgins, Henry’s mother. Her presence is always comforting and when she speaks, even her arrogant son takes notice.

Liz Plumpton performs a pretty impressive double as housekeeper Mrs Pearce and socialite Mrs Eynsford-Hill. Her character changes were seamless as too were her quick costumes switches. Plumpton’s duos were clever and confident, cool and competent. 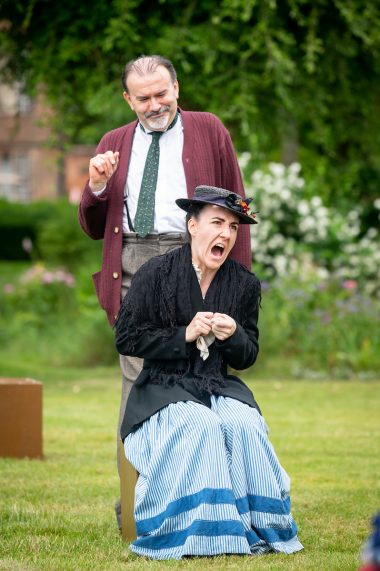 Ray Stafford added strength to the line-up with his intelligent, almost laid back approach to Eliza’s dustman dad. I’ve never seen it performed so uniquely.

Ella-Louise McMullan and Jordan Bird both give pleasing cameos as Clara Eynsford-Hill and her bother Freddy whilst Martin Tedd turns in a respectable outing as Colonel Pickering.

Colin Simmonds as professor of phonetics Henry Higgins ticks all the boxes and then some. He is amusing, annoying, engaging, boorish, childish and profound all on cue and all with a reserve of energy that bubbles along merrily without boiling over. Simmonds is an actor of immense talent whose Crescent performances are always something to savour.

I must give a special shout-out to the duck that decided to give his own show by nibbling at the open-sandaled toes on offer in the front row.

It was indeed an evening of magic and mirth where it was a delight to be in the audience.

Catch the next leg of the tour at Blakesley Hall on Saturday and Sunday, July 24 and 25.