ACTRESS Jodie McNee as Johanna Faustus is a one-woman powerhouse.

She spends two hours on stage expounding as much energy as would the winner of a gruelling marathon or a 15-round title fight.

Her performance is relentless – from the moment where we first meet Johanna trying to levitate and time travel by having her head held in a tub of water to the final seconds when a clock chimes midnight and the devil takes his due.

McNee speaks, acts and delivers like a continuous burst of machine gun fire in a quite remarkable tour de force.

As to this new version by Chris Bush of the tragedy Christopher Marlow penned way back in 1631 it is complicated – enjoyable and worthy but most definitely complicated. 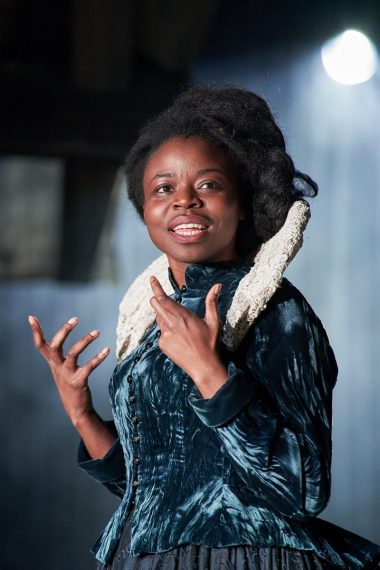 There is much to like – an outstanding set by designer Ana Inés Jabares-Pita that comprises a cross between a giant wasp nest shaped cowshed and a time warp tunnel – the walls of which become projection screens. The tunnel provides for some interesting acting spaces, including a dark and moody recess at the back from where devilish things brew up and emerge.

Richard Howell complements the Jabares-Pita set with a lighting design taking us from a true pitch black to galactic explosion and splendour whilst eerie music and noises from sound designer Giles Thomas complete the creation of this strangeness.

Heading up the creatives is director Caroline Byrne, who sets a frantic pace for her company to pursue. Everything is always delivered at the gallop never a trot, which is merciful lest we should have too much time to actually try and comprehend everything we are seeing and hearing.

Our female Faustus, the daughter of an impoverished apothecary and a wicken witch, dear Johanna, is an inquisitive soul. She conjures up Lucifer (an ingenious double as dad and devil by Barnaby Power) to find out if her mother was his acolyte. Mother was you see, martyred by pious Christian goody-goodies and to find if she ended up in the nice place or the hot place, Johanna needs to access the list in Hob’s little white book. For this she enters into a contract with him but one where he will let her enjoy knowledge that is mostly denied to women.

Johanna gets an extra 144 years of life and the ability to become a time traveller.  She sets out to beat Lucifer at his own game and make things good and better – sadly the reverse always thwarts her best endeavours though she does get to meet female pioneers Elizabeth Anderson and Marie Curie.

In truth, the further forward in time our heroine travelled. the more confused I became.  That doesn’t mean to say I didn’t enjoy the production – I did immensely. In fact the last Faustus I saw was four hours long at the Other Place at Stratford and where someone behind me loudly whispered ‘For God’s sake get on and die’.

This Bush/Byrne epic is original, challenging and enthralling with a liberal dose of humour thrown in for good measure.

Faustus runs at the Birmingham Rep until March 7.