WHO WOULD have thought that a play about opinionated weather forecasters would make great theatre?

Certainly not me, nor did I realise that were it not for the persistence of one feisty little Scotsman Dr James Stagg, D-Day may well have meant D for disaster – rather than D for designation day. 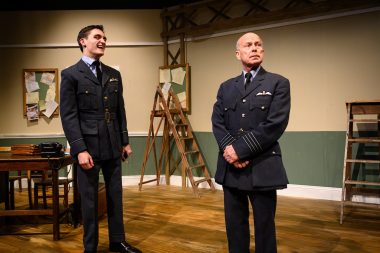 ‘Pressure’ is a very apt, all-inclusive title, which describes the days when the allied commanders were under unimaginable pressure to press the button on the right day to launch the invasion of Europe. Whilst they deliberated, British, American and other allied troops waited restlessly to cross the channel to the Normandy beaches.

Meteorological pressure concerns the weight of air above the clouds, which can force them to shed their waters.

Should stormy weather spring up, many would never even make it to the fray, but rather be lost at sea along with their military hardware. Likewise if the clouds were too black, the air force couldn’t fly and provide the necessary cover. 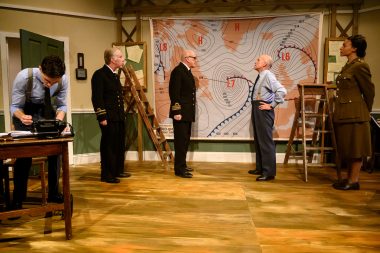 There is even more pressure in the fact that Stagg’s wife is in hospital somewhere having a bad time with a baby that just won’t come forth whilst he is bunkered away in the most secret of secret war offices knowing that what a wrong forecast will not only cost tens of thousands of lives but set the course of history.

Enter Weatherman 2  (no not the infamous Michael Fish, he was still in his cradle) American super weather sleuth Colonel Irving ‘P’ Krick – Krick, who predicts fair weather for D-Day on June 4 whilst Stagg is convinced there’s almighty storms brewing and the date must therefore be moved.

Just whose predictions will Supreme Allied Commander General Dwight D ‘Ike’ Eisenhower and his fellow commanders go by? Therein hangs the plot of this superbly tense piece of theatre by the talented writer/actor David Haig who also played Stagg in the West End.

The Crescent theatre company was, and I promise this is the last time I will use the pun in this review ‘under pressure’ – to come up with an all-but-one male cast of actors that could do justice to the play, the history – or worthy of the officers military uniforms so superbly provided by costumers’ Vera Dean and Pat Brown.

‘Ike’s message to all on D-day June 6, 1944, was   – “We will accept nothing less than full victory! Good luck! And let us all beseech the blessing of Almighty God upon this great and noble undertaking.”  No doubt director Karen Leadbetter said similar things to her cast before they ventured forth on opening night. They certainly did her proud and she them in painting this production with a deft and steady hand.

Martin Tedd has a mighty task to engage us as the irascible meteorological genius that was ‘Stagg’ and my word, he delivers. We feel the struggles that rage within and cheer for him when the rain finally buckets down as he predicted.

The huge talent that is Colin Simmonds is absolutely mesmerising as General ‘Ike’ – the attention to every detail of his mannerisms has to go down as one of the greatest performances in Crescent history and I don’t say that lightly as I’ve witnessed many over the decades.

Robert Laird is spot on as Colonel Irving ‘P’ Krick the ‘other’ weatherman. His accent is faultless and his characterisation a perfect essay in understated believability. 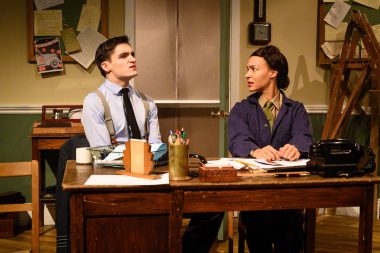 Griff Llewelyn-Cook captures the youthful exuberance of Stagg’s  weather groupie and number one believer ‘Andrew’, Michael Barry plays General ‘Tooey’ Spaatz superbly as a tough no-nonsense hawk and Brian Wilson in addition to his Admiral ‘Bertie’ Ramsay role gives a deliciously welcome little cameo as a talk-till-he drops electrician ’who only came to install some phones’ but finds himself in a ‘Hotel California’  fix where he can’t check out.

Alexandria Carr is the sole female member of the cast – she plays girl-Friday Lt Kay Summersby around whom all things revolve. She is a rock and confidant to all, which Carr captures perfectly – she is a highly watchable talented young actress.

The war-come-weather room set by Keith Harris and Rosie Anderson is perfect, as are the extensive meteorological props by Andrew Lowrie, Jackie Blackwood and Carolyn Bourne.

Light and Sound from John Gray, Patrick McCool, Ray Duddin and Wanda Raven work in perfect harmony to take us into the very soul of the action. Whoever came up with the idea of fanning damp air like washing on a clothesline wafting into the auditorium deserves an Oscar for smell-a-long genius.

‘Pressure’ is a play that the Ron Barber studio was designed to stage – it is an evening’s theatre to be savoured – an all round triumph and destined to become legendary.

Pressure runs at The Crescent until Saturday, October 26.