A MIDSUMMER Night’s Dream by OddSocks was more like a pantomime than your stereotypical Shakespeare production and it was absolutely brilliant.

It started with an introduction of the small six-strong cast, already breaching the fourth wall.

That – and a performance of Dire Straits’ Money for Nothing played on electric guitars – set the scene of the excellent extravaganza we were about to witness.

Avoncroft Museum with its historic buildings surrounding us and a perfectly sun-kissed evening provided the perfect setting as the performers acted and sang their hearts out.

They also mingled with the audience, helping themselves to picnics and generally enjoying this staging of one of The Bard’s best-loved plays.

Andy Barrow directed the piece and played three parts – Egeus, Oberon and – his best – Bottom which had the crowd in hysterics throughout.

There were so many highlights during the evening but the one which had the crowd roaring with laughter the most was the ‘show within the show’ by Bottom, Snug (Peter Hoggart who also played Lysander) and Flute (Alex Wadham, also Demetrius). They enlisted the help of an unsuspecting audience member to play a wall and there was hilarity and double entendre aplenty. 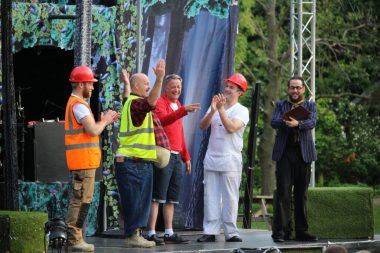 Asha Cornelia Cleur was superb as posh and feisty Helena and Alice Merivale did a magnificent job as Hermia and Puck. Some of the costume changes she needed to perform to play her two characters in the second half would have required most of us to somehow stop time to get off and on the stage again.

The scenes where Lysander and Demetrius and Hermia and Helena come to blows were also very funny with well-choreographed comedy fight scenes. 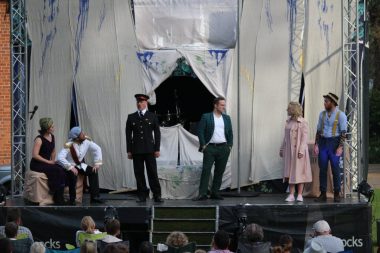 The set, covered with a dust sheet for the first part, looked basic but as the plot unfolded, so did its intricacies.

Titania’s boudoir doubled up as the moon with a simple spin and a central pole and carefully placed boxes gave platforms for plenty of acrobatics. 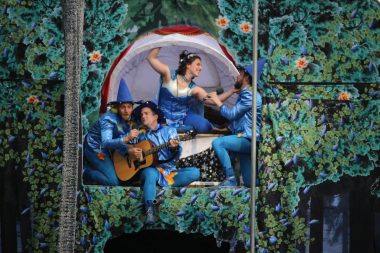 The rendition of Toploader’s Dancing in the Moonlight was a clever addition – both to the upbeat ending it merited and as a way of ensuring the audience left with a spring in its step as it filed towards the exit. 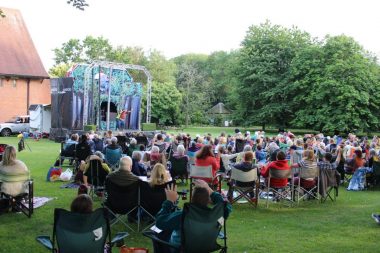 OddSocks are a great company to go and see if you want to introduce younger viewers to The Bard’s work and for those who usually shy away from archetypal Shakespeare productions.

The only problem is if you get the Shakespeare bug and go and see more productions afterwards, you could see other  companies struggling to match the might of OddSocks.

The tour moves onto Harrogate, Redcar and Liverpool this week and then 11 more venues – including Mary Arden’s Farm – before the final performances in the Channel Islands from July 29 to August 20.

Try and catch it if you can – you will not be disappointed.