THE MUSICAL version of Charles Dickens’ classic tale had passed me by prior to this BMOS production and thus I approached the evening with a mixture of excitement and apprehension – excitement as I know that BMOS are first off the mark when new shows are released for performance to the musical theatre community – and they never spare the pennies when staging them.

Apprehension as to what damage the American writers Mike Ockrent and Lynn Ahrens  might have done to the words of perhaps our most treasured novelist. 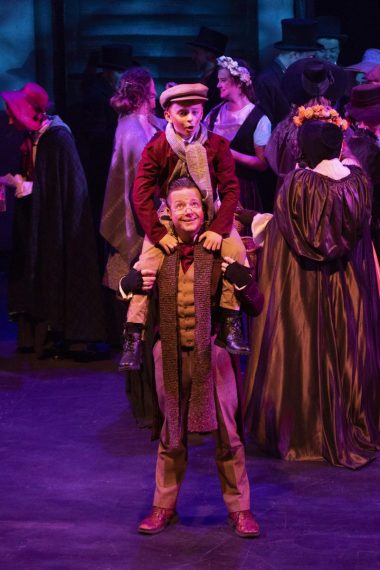 Amazingly they wrote this back in 1994 and then, as I learnt from the programme, it was performed annually for a number of years at the Paramount Theatre in New York – only coming to London but three years ago in 2016.

Well, all fears and doubts were unjustified – it’s a joy from start to finish – taking little away from the original classic tale but bringing modern accessibility via a really fabulous score from Alan Menken.

This ‘Christmas Carol’ flows seamlessly, never pausing for breath. It has spectacle, passion and is performed by a well-drilled company who sing and act their socks off under the direction of Stephen Duckham.

Not a weak link did I spot in this cast and stand-out performances for me came in abundance from Elliot Beech as a heart-warming Ghost of Christmas Present, Patrick Pryce as a flying wild-haired, wild-eyed, chain-bedraggled Marley, Daniel Parker as an endearing and believable Bob Cratchit as was his wife Mrs. Cratchit, played by Sarah Morris.

Also in my stand-out list comes the mighty Michael McCulley as Scrooge’s nephew Fred, a small but eye-catching performance from Siân Patterson as Fred’s wife Sally, an engaging Annabel Pilcher as the love of Ebenezer’s life Emily and happy chappies Andy Treacy and Jake Genders as Young Marley and Young Scrooge. 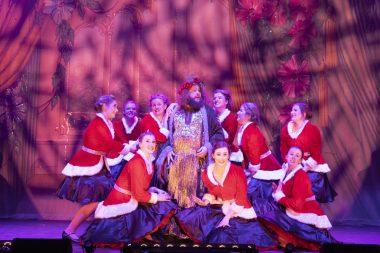 Then there was the fabulous Fezziwigs, Nick Owenford as Mr and Jo Smith as Mrs – my word they gave their all – acting majestically, powerfully vocal, leading the party dancing with a boisterous jubilance that was infectious and jumped the curtain line to have us smiling from ear to ear.

Of course all would be lost if Scrooge himself didn’t have the right amount of ‘Bah Humbug’ charisma, but Alistair Joliffe was for me every bit as charismatic as the other Alistair – I write of course of that late great original skinflint in the 1951 black and white movie, Alistair Sim.

Joliffe is dastardly and derisory of Christmas as befits the most miserable of misers, radiates repentance as the ghosts show him his past, present and future and quite rightly has us feeling sorry for the old codger come his Christmas Day ‘good will to all men’ (plus women and especially poorly children) shenanigans. 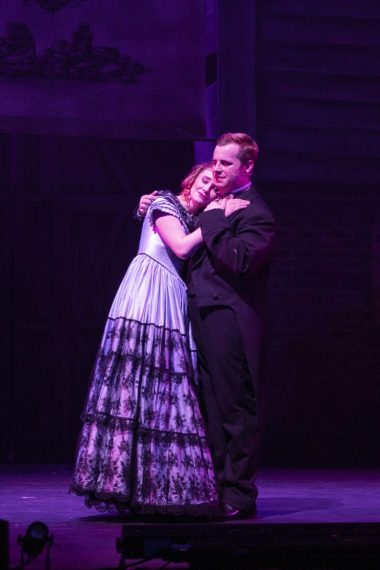 The orchestra is spot-on, perfect under the musical direction of David Eastro, the sound by David Chinn well-balanced and the lighting design by Pete Watts was quite simply not only the best I have ever seen in a musical society production but included a couple of sparklingly original jaw dropping effects that deserve a gold star.

This BMOS Christmas Carol is a wonderful way to start the festive season – I just had to have a mince pie whilst writing my review in tribute.