Blood Brothers flows better in the second half at the Hippodrome

Amazingly it failed to attract an audience in its first West End run – then Bill Kenwright got hold of it and breathed new life via a tour which gained in reputation at every outing until it went back to London like a gladiator entering an arena and  the rest is history. 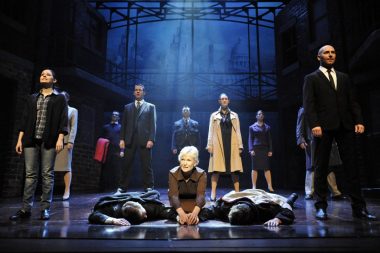 I have seen at least four different productions and enjoyed every one including this latest 2019 version at the Birmingham Hippodrome directed by Bob Tomson and Bill Kenwright.

Lyn Paul has played the mother of the twins, Mrs Johnstone, several times over the last couple of decades – the programme note says this is her swansong in the role. She is excellent and stands out in a cast that is talented but fairly inexperienced.

It seemed to me that the two acts are two different shows – act one where the twins Mickey (Alexander Patmore) and Eddie (Joel Benedict) are seven-going-on-eight year-old children and along with elder brother Sammy lacked believability.

They simply tried too hard to act as kids and end giving over-hyped performances.

In act two, where they are older, everything is calmer and more engaging.

Danielle Corlass as Linda is quite delightful throughout – Chloe Taylor as Mrs Lyons is rightly disturbing whilst Hannah Barr makes the most of her cameos.

Robbie Scotcher, mostly seen peering out of windows and behind walls, gives a haunting performance as the all-seeing narrator.

The climax where the brothers discover they really are brothers and the tragedy that ends the sad tale is simply awesome. 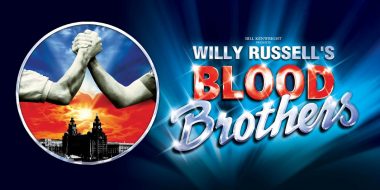 The final number ‘Tell Me It’s Not True’ is one of the most powerful anthems ever written and the company does it justice.

The standing ovation is deserved but would be even more so if the brakes were applied earlier.