OPERA fans in the West Midlands have had their seasonal fix this week with the welcome return of Welsh National Opera and three operas at the Birmingham Hippodrome, which focus on the eternal question of the role of Monarchy.

For the non-opera buff, the week provides an excellent opportunity to experience accessible opera with each production a spectacle in its own right and a handy electronic translation of the words (subtitles) above the stage to help you understand the story.

The week kicked off with Verdi’s Un ballo in maschera (The Masked Ball), based on the assassination of the King of Sweden during a masked Ball at Sweden’s Royal Opera House in 1792. 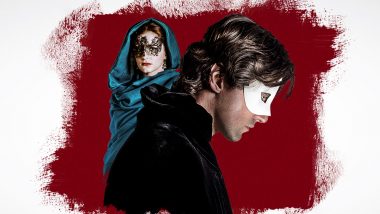 This new production super-sizes the melodrama to great effect; Count Ricardo holds court whilst seated atop a coffin amongst catacombs which then become an extension of the theatre itself with several levels of tiny red-curtained theatre boxes.

The whole piece is delightfully over-the-top and tongue-in-cheek – the politicians in the Count’s court are depicted as blundering buffoons as they troop off supposedly incognito to spy on the Clairvoyant Ulrica whilst her coterie of female followers stick knitting needles into red wool effigies.

Whilst there are no standout arias in this lesser-known Verdi opera, the music nonetheless features many of his well-known motifs. The love duet between Count Ricardo and his love Amelia in Act 3 is sublime – Gwyn Hughes Jones as the Count has the perfect timbre to his voice whilst Mary Elizabeth Williams as Amelia effortlessly transcends the melodrama to tug at the heartstrings. 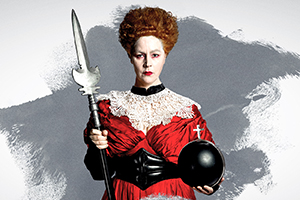 The set is a series of large walls that are swung around the stage by an army of carefully choreographed stage crew, thus again reflecting the theatre back at itself.

The masked ball at the end is full-on steampunk in its effect with the company dressed in ‘Day of The Dead’ costumes and masks.

This is where the production felt less assured; for a melodrama to work fully, the cast must perform as if they totally believe it and there were times in this production where the chorus appeared hesitant.

The movements throughout were tentative and some chorus entries felt ragged. A special mention for Harriet Eyley, making her debut as a delightfully puckish Oscar. Embrace the OTT and this is a thoroughly enjoyable production.

Mozart’s The Magic Flute is undoubtedly the best-known opera in this WNO season and yet it is the least engaging, in a classic case of ‘style over substance’.

The Magic Flute is known as the Mason’s opera, filled as it is with references to masonic symbols and beliefs. This version takes this fully on board and fuses it with Dali-esque surrealism from the very start as Tamino (Ben Johnson) fights off a giant prawn in a room full of doors.

He is rescued by three lady servants of the Queen of The Night (played in delightfully flirtatious style by Jennifer Davis, Kezia Bienek and Emma Carrington) and so begins a journey in which he must rescue the Queen’s abducted daughter Pamina (Anita Watson) from the clutches of Sarastro (Jihoon Kim), the leader of a mysterious Brotherhood.

The Queen gives Tamino a Magic Flute to help him in his quest.

Sarastro sets him a series of tasks to test his suitability to join the brotherhood and claim Pamina as his own.

The surrealism continues with the brotherhood dressed top-to-toe – from bowler hat to umbrella- in tangerine.

The clever set is constructed within a box on the stage so that the floor is raised.

This enables the visually arresting spectacle of the brotherhood poking their bowler-hatted head and shoulders through the floor.

But whilst the look is clever and thought provoking, it does limit movement and seems to restrain the performances, which, whilst note perfect, did not manage to break out of the box into which they had been placed.

In contrast, Donizetti’s Roberto Devereux was undoubtedly the performance of the week.

Based on the story of Queen Elizabeth I’s rumoured infatuation with Robert Devereux and his subsequent beheading, from the moment conductor Carlo Rizzo’s baton strikes up the stirring overture from the excellent WNO orchestra, you know you are in for a treat. 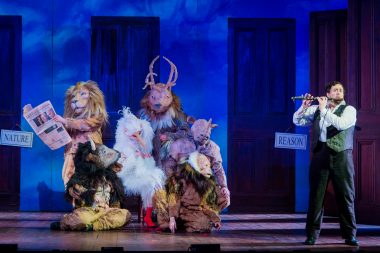 The brilliantly bitchy, gossipy leather-corseted ladies-in-waiting at the court of Queen Elizabeth I set the scene, as they question Sara, the Duke of Nottingham’s wife. Sara (played with passion and intensity by Justina Gringyte) has been forced into marriage to the Duke by the queen, but is in love with the Earl of Essex, Roberto Devereux – as is the queen.

The queen’s counsel believe Devereux is a traitor who should be sentenced to death, but the queen will spare him if he professes his love for her.

Aware the queen is trying to trap him into revealing he does not love her but someone else, Devereux must tread carefully so as not to betray Sara.

The austere set which takes an Elizabethan long gallery as its’ inspiration provides the perfect setting for the action.

This Elizabeth is a warrior queen and there was an audible gasp from the audience as she appears resplendent in red in Act 2 astride an extraordinary spider-like chariot, expertly manoeuvred by her ladies-in-waiting.

Special mention to the stunning lighting effects and outstanding costumes which all add to the intensity of this production.

The role of Roberto Devereux is superbly sung by Barry Banks and Roland Wood’s performance as The Duke of Nottingham as a last-minute stand-in is full of poignancy as his friendship with Devereux is put on the line.

But it is the marvellous Joyce El-Khoury as Queen Elizabeth that steals the performance.

Her sheer vocal power is enough to slay you; but add in her extraordinary range and effortless skill in taking her voice from forte to sotto voce in one breath and you know you are witnessing something very, very special.

WNO will return to the Hippodrome with three new productions in the autumn of 2019.

Top marks for the History Boys at the Wolverhampton Grand