ONCE IN a while a show comes along that is so breathtakingly original that it ‘knocks your socks off’ as the saying goes.

Well for me Amélie is it, undoubtedly my musical experience of the year so far and I give it more stars than the brightest kid in the class’s merit book.

Amélie was a multi-award winning film back in 2001 which I took my 15-year-old son to see – he hated it – I loved it – now many years later where his artistic tastes have become much broader, on revisiting it he has discovered its charm – looking forward to hearing his thoughts on the musical. 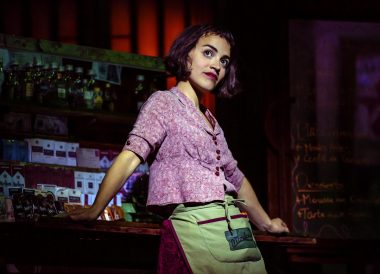 The story revolves around an unloved introverted child, Amélie who stealthily travels the streets of Paris seeking to bring joy into the lives of complete strangers.

Audrey Brisson, who flies in and out of scenes via a seemingly magic lampshade is totally captivating in the title role – Brisson is petite in stature but oh so powerful in voice and superhuman in agility. Apparently her feline flexibility comes from being Cirque du Soleil family stock. It may sound a cliché but Brisson seems to have been born to play Amélie on stage perhaps as much as her namesake Audrey Tatou was born to play her on film. 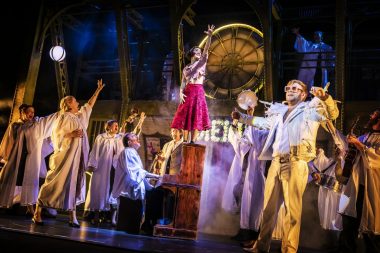 Director Mike Fentiman, using well crafted tools of the book by Craig Douglas and music and lyrics by Nathan Tysen and Daniel Messé as his canvas, has seemingly done the impossible – taken a delightful film and turned it into an equally exquisite musical.

Fentiman has assembled a glorious company who double and treble as Parisian workers, drinkers and bohemians and also make up a street orchestra – playing everything from flutes to double basses, through violins, cellos, accordions, drums and penny whistles.

The story goes down many an eccentric alleyway none more so than when Amélie imagines her own funeral mirroring Princess Diana’s – complete with Elton John. 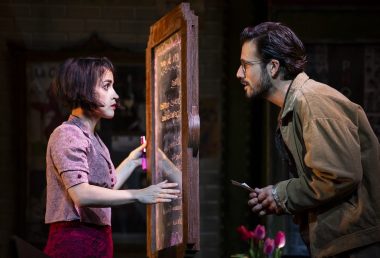 My moment of the show is when our heroine finds love with of all people a sex shop worker – Nino (spot on performance from Danny Mac). There occurs between them the most wondrous stage kiss, the silence is captivating, the tension spine-tingling and the moment a magical masterpiece.

Madeleine Girling’s design is as eccentrically majestic as the show itself. Its set-piece structure is as full of surprises as an advent calendar. It opens piece by piece to reveal a crowded Paris Metro, a church and its confessional, art galleries and much more but best of all – Amélie’s hideaway, way up in the air behind the station clock.

On stage the set comprises two beat up upright pianos and a few random tea chests. The pianos turn into fruit stalls, bars and the infamous sex shop – as well of course as being practical, the tea chests become everything else furniture-wise and part of the orchestra as drum boxes.

Amélie is a show I would see twice and thrice and hopefully will – don’t miss it – this is show like no other.