A concoction of colourful Cockney characters in Tread the Board's Pygmalion

MENTION Eliza Doolittle and you will most likely get Audrey Hepburn and ‘My Fair Lady’ as the response – likewise Prof Henry Higgins and Rex Harrison in the famous feel-good 1964 movie.

This iconic film was pretty much the 1956 Broadway musical put on screen (except Julie Andrews was in the stage version).

This magical story of a cockney flower girl whose life changes forever when the professor gives her elocution lessons was in fact a 1912 play by one of our most famous playwrights – George Bernard Shaw.

The ‘Tread the Boards’ never fail to impress with their intimate classical productions and ‘Pygmalion’ directed by the Shaw-aficionado Jonas Cemm is another notch to add to their theatrical bedpost – it is as delightful as it is absorbing. 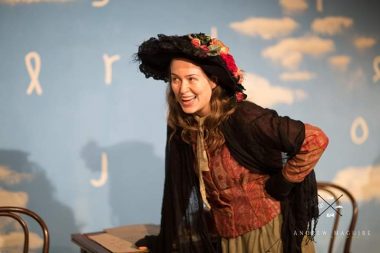 Set against a cycloramic backdrop of blue sky and fluffy white clouds with letters and symbols from the Shavian alphabet being tossed about it on it by the wind we are transported back to Victorian London, hansom cabs and the class divide and social gulf of the era.

Den Woods delights as Mrs Higgins bringing a beautifully paced decorum to the role where you find yourself agreeing with her every word like a trusted pundit and a mum too treasure.

Martin Tomms makes a believable Col Pickering, Higgins houseguest, chum and co-conspirator in Elza’s transformation (his non-stop facial expressions are a whole back story in themselves), 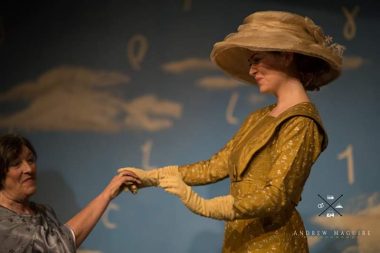 Alexandra Whitworth is joyous as Eliza, her dialect flips from the gutter to the palace. She is ever-watchable and like her speech she changes from being sweetly Cinderellic to feminine heavyweight champion in her final confrontation against deep-rooted misogyny –  cheer-worthy stuff!

His half camp – half-brat pompous ass is so different to the sanitised Rex Harrison and I guess is just what Shaw intended.

I cannot recommend this production highly enough, lots to take in, admire and discuss. Once again ‘Tread the Boards’ give us fringe theatre at it’s finest.

Pygmalion runs at The Attic Theatre, Stratford, until June 30.

New rules to drive down cost of school uniform for families