A Bunch of Amateurs is very professionally staged in Kidderminster

THIS was my first visit to ‘The Rose’ and I was struck by the thought that there could be no finer location to perform a tender English comedy, which concerns a local drama group performing in their own little theatre.

The pride and passion of the front of house volunteers and the audience regulars at The Rose was quite infectious.

‘A Bunch of Amateurs’ which was originally written by Ian Hislop and Nick Newman as a film in 2008 starring Sir Derek Jacobi and the late, great Burt Reynolds. It was in fact, the Royal Film performance that year and apparently the Queen enjoyed it so much she had it shown again at her Sandringham Christmas party. 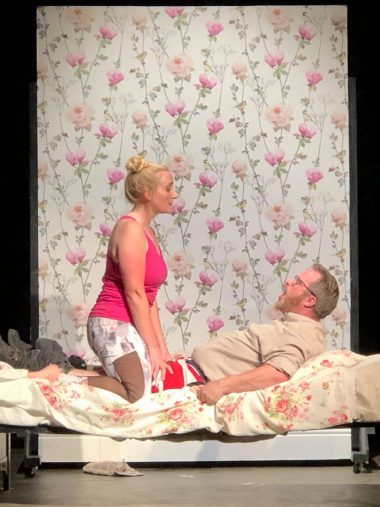 It was then turned into a stage play, which probably because of its title has never graced the West End Stage. After all who wants to pay a couple of hundred pounds to see a bunch of amateurs – no need to answer that it is rhetorical.

Nevertheless within that title lies a challenge – can actors play actors acting badly without appearing like a bunch of ‘don the slap and the wig part timers’ -whose audience are press-ganged into attending because it’s Auntie Ethel, Uncle George or eight-year-old Elisha Botts first steps on stage?

Under the direction of Coral Dickinson this gauntlet is taken up by Kidderminster Operatic and Dramatic Society and delivered with dollops of panache and alacrity.

The plot is not implausible really – Stratford-St-Johns drama group in Suffolk is in danger of closing because they don’t have the funds to repair their leaking, aging building, decide to try and get a big name to play King Lear in their final do-or-die production.

They can’t believe their luck when fading movie action hero Jefferson Steel says ‘Yea’. Trouble is Steele thinks he’s appearing in Stratford as in Royal Shakespeare Company not Stratford as in Hicksville St Johns. These things happen – it’s rumoured that the Arab princes who bought Manchester City football club actually thought they were buying United – what a difference a name makes? 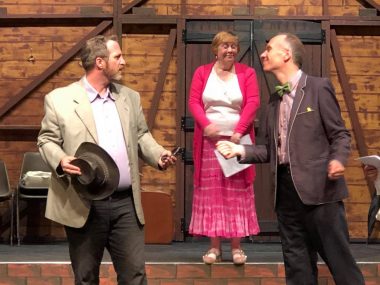 So lets get on to this bunch of amateurs that Dickinson has assembled for this KODS cast –Dorothy Nettel as the company director Tracey Mann whose bright idea it is to bring in a star sets the tone from the get-go with a warm naturalness that becomes a rallying call as crisis follows crisis, Mark Cox provides many a laugh as Denis Dobbins the company goffer and superstar Steele’s entourage whilst Claire Hadland makes a delightfully comedic job of playing landlady-come-Lear-cast member, Mary Plunkett. 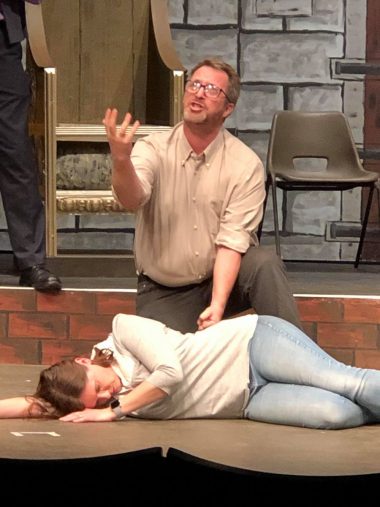 Lauren Bell the glamorous wife of brewery owner and show sponsor is performed with the cheekiest of smiles and a sexy swagger by Emma Paine and Jessica Steele – daughter of said superstar Dad, is given believability by Lucy Charlotte-Webb.

Andy Partington is spot on as the Machiavellian prima donna Nigel Dewbury, his caustic humour and over-the-top portrayal is compulsive.

Director Dickinson has him coming from a different entrance every time, scaling walls and leaping from chairs – convincing American accent too.

I have some minor niggles, we are left in the dark too often –remember seconds of silence in the dark seems like minutes to an audience – easily solvable Ms Dickinson – however your attention to detail in both characterisation and staging is most laudable.

This KODS cast may be amateurs playing amateurs but you really can’t see that join. They are a well-drilled, talented team, which do their real theatre company and director proud.

The final performances are tonight and tomorrow.