THE BROMSGROVE Society, set up to preserve the town and district’s proud history, celebrates its 40th anniversary today.

More than 200 people packed into the inaugural meeting to launch the organisation on May 13, 1980, which followed a decade of concerns about the town’s architectural past.

Throughout the 1970s the public had expressed fears that a number of centuries-old and much-loved buildings were falling into disrepair and, consequently, facing the threat of demolition.

Many were anxious the loss of buildings, such as The Mitre Inn, Stoke Prior Mill and Farm House and the old Workhouse, would have a detrimental impact on the overall character of the town.

When the Stratford Road Almshouses were demolished without notice a steering group was formed to make the public’s feelings known.

Chris Pancheri and Jennie McGregor-Smith wrote to the council and local newspapers to drum up support for the formation of a new civic society to promote pride in the town and district and encourage an interest in conserving and enhancing the built and natural environment.

Over the last 40 years the Bromsgrove Society has continued to promote an interest in local history and works hard to ensure the town’s oldest buildings and character is preserved.

The group monitors and submits comments on planning applications and supports other preservation schemes within Bromsgrove. 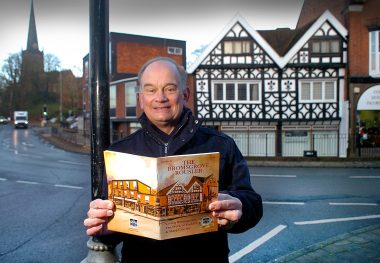 The Society’s 500 members and others who are interested in the local area are encouraged to attend activities including the series of monthly talks, an annual lecture, the summer school and other events.

Jennie said: “I didn’t think it would still be going in 40 years time.

“We were delighted with the number of people who came to the first meeting and the fact we have so many people attending our events now shows how worthwhile and needed it still is.

“The town would look a lot different today without it the Bromsgrove Society and we still have a lot more buildings which need saving.”

She added the way the council had always took the group’s planning application comments on board showed how highly it was regarded.

To celebrate the 40th Anniversary a new commemorative logo has been created and the Society had planned a social function after July’s AGM but because of the Coronavirus lockdown that now cannot take place.

The group hopes to mark the occasion and cut a commemorative cake in the future.

A History of the Bromsgrove Society by the town’s genealogist Mike Sharpe will be published and sent to all members with next month’s newsletter.

People can visit www.bsoc.co.uk to find out more about the Bromsgrove Society and how to join.