IT’S NOT been intentional that I’ve been a little late to join the party that is the smash hit Benny Andersson/Bjorn Ulvaeus musical ‘Mamma Mia!’

Seems I was the only one in the packed hippodrome auditorium that was a Mamma-virgin.

“I just can’t wait for the bit at the end when we all get up and dance” said the lady next to me. Now did that mean the best bit about the show is the walkdown? 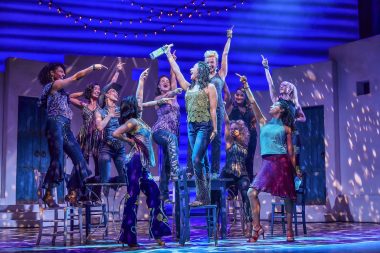 In actuality it was all a joy – what’s not to like? Certainly not the Abba songs, which have been part of more drunken tomfoolery nights than I can care to remember.

Of course the show is wall-to-wall Abba and with a cast that sound – dare I say – in some cases better than the originals.

Especially in Act two when sound levels had been adjusted – but the sound level is my only criticism in a night of unabashed hedonism.

If there are any of you out there who don’t know, it’s a story about a wedding with a ‘Who’s–ya-Daddy’ sub plot all set on a Greek island.

Sophie Sheridan, a charming outing by silver-voiced Jena Pandya, is the bride-to-be who wants her father to be there. Trouble is, having read her mother’s diary, it seems she can perm any one of three contenders in her mother’s summer of passion 21 years ago. So what else is there to do but secretly invite all three?

Her mother Donna Sheridan is played by Sara Poyzer and is the real deal. I’m sure Meryl Streep was brilliant as Donna in the movie (haven’t seen that either) but she couldn’t do a better job than Poyzer- she’s hypnotic and has an amazing vocal range.

Her rendition of ‘Slipping Through My Fingers’, which she sings to her daughter, packs passion with a capital ‘P’. 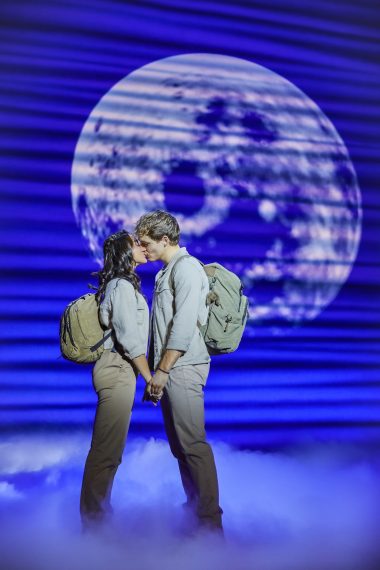 From the minute they arrive on the island the would be daddies make a great trio – that’s Daniel Crowder as Harry Bright Phil Corbbitt as Bill Austin, Richard Standing as Sam Carnichael. The banter between them is delivered with panache and comedic mastery. They can also strut their stuff pretty well in the dance routines and belt the big numbers with the best of them.

Toby Miles is Sky an energetic groom-to-be and he’s well supported by an acrobatic bunch of beach bums, including Pepper – a frenetically funny contribution from James Willoughby Moore with his toy-boy fixation on Tanya.

Phyllida Lloyd’s direction is big, bold and all inclusive and the band do full justice to the Abba catalogue under the baton of Carlton Edwards.

It was all quite a delight from ‘Dancing Queen’ to ‘Take A Chance On Me’ and back again. Yes the walkdown was quite something; hands in the air and folk dancing in the aisles. I thoroughly enjoyed the party – sorry I was late!

Mama Mia runs at the Birmingham Hippodrome until next Saturday, May 14. Click here for times, tickets and more information.