RETIRED professional chef Paul James, author of travel and food blog Recipes From My Travels, writes for our paper.

LET me take you to Benidorm, a place renowned for its boisterous Brits abroad, beers overflowing, singing and dancing in the street, but as I don’t drink anymore I left all that to others.

I found Benidorm a fascinating place but the cuisine was mostly geared up for the tourism trade, fish and chips, kebabs, pizzas etc… 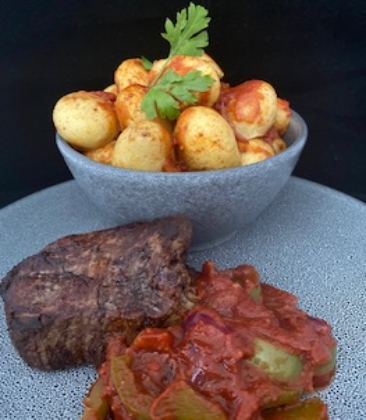 None more so than Tapas Alley, a scattering of establishments all selling their own versions of various small plates of food.

One plate I did try was a beef stew in tomato sauce, nice as it was I just wanted to elevate it a bit more.

So here is my version of this dish, but using fillet steak napped with a Spanish Sofrito Sauce and served with patatas bravas.

Oh and by the way, I did have a little dance with an Ossie Ardiles lookalike on the accordion…..well I think he was a lookalike!

But then again, he did know all the words to “’Spurs are on the way to Wembley’.

FILLET STEAK WITH A SPANISH SOFRITO SAUCE AND PATATAS BRAVAS.

Knob of butter to baste

For the patatas bravas

For the Sofrito sauce

Cut up your potatoes and place in a pan of cold water, bring to the boil, simmer and cover until par boiled.

In a hot frying pan, lower the seasoned and slightly oiled steak gently into it, remember the pan needs to be hot otherwise it will just ‘stew’ instead of getting a nice golden crust on both sides and importantly the edges too. Add butter and continuously baste the meat.

For a medium to well done steak, it’s about four-and-a-half minutes either side.

Remove from pan and cover with foil and rest on a warm plate until the patatas bravas and Sofrito sauce is ready.

Drain the potatoes, place on a baking tray and season with salt and paprika.

Bake in a preheated oven at 180c for around 15 minutes or until golden.

In the same pan as the steak, wipe clean and add a bit of oil, fry your onions and pepper until soft, add the garlic paste and paprika and cook for a further 5 mins.

Add the pasata and warm through.

Assemble on a plate with the Sofrito sauce napped over the steak and a good sprinkling of paprika on your potato bravas.

All the best and enjoy!

Nicky Campbell: How my dog helped me through my breakdown

Guide: How to buy a house in London

Homeschooling? Take off with these Flightsize Lessons