The Duke of Cambridge has issued a rallying cry to the next generation to keep on “demanding change” as innovative green projects from across the globe were awarded £1 million by his Earthshot Prize.

William called on the younger members of society not to “give up hope” during the event and he announced the US would be the host nation for the next awards ceremony.

The move for the Earthshot Prize next year means William and Kate could travel to US to host the event, where the Duke and Duchess of Sussex have made their home.

At the end of the event, televised by the BBC, William, who was joined by Kate, took to the stage to tell the audience:

“I want to say something to the young watching tonight.

“For too long, we haven’t done enough to protect the planet for your future, the Earthshot is for you.

“We are going to find the solutions to repair our planet.

“We will rise to these challenges.”

The younger generation has been inspired by the actions of climate change activist of Swedish teenager Greta Thunberg, who first started her Friday protests outside her country’s parliament in August 2018, inspiring children across the world to stage school strikes.

Harry Potter star Emma Watson, wearing a wedding dress made of 10 dresses from Oxfam, and Dame Emma Thompson were among those who trod the ceremony’s green carpet.

Kate arrived wearing an Alexander McQueen dress made for her in 2011, while her husband wore a dark green velvet blazer and a polo neck which co-host Dermot O’Leary later jokingly described as “looking very Bond”. 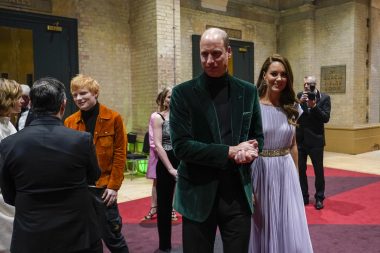 Photo: The Duke and Duchess of Cambridge during the first Earthshot Prize awards ceremony at Alexandra Palace in London. Credit: PA. Picture by: Alberto Pezzali

No stars flew to London for the event and guests were asked by organisers to “consider the environment when choosing their outfit” for the awards inspired by the Apollo moon landings, nicknamed Moonshot, which helped advance mankind’s technological achievements.

Among the winners were projects restoring coral reefs, redistributing unwanted food to the disadvantage and a project battling the issues contributing to air pollution in India.

Kate presented the winning award in the protect and restore nature category to the government of Costa Rica, which has pioneered a project paying local citizens to restore natural ecosystems.

“Nature is vital to us all.

“A thriving natural world, regulates our planet, nurtures our physical and mental health and helps feed our families.

“But for too long, we’ve neglected our wild spaces and now we’re facing a number of tipping points.

“If we don’t act now, we will permanently destabilise our planet and we will rob our children of the future they deserve.”

“I’ve spent much of my working life, acting in fictional make believe worlds where the impossible, can be made possible.

“Now, we need to do the same thing with climate change here in the real world.

“There have been many other times in history where it’s been said something couldn’t be done, and then, people believed in a better world and made it so.

“(This) time is no different, I know that we can.” 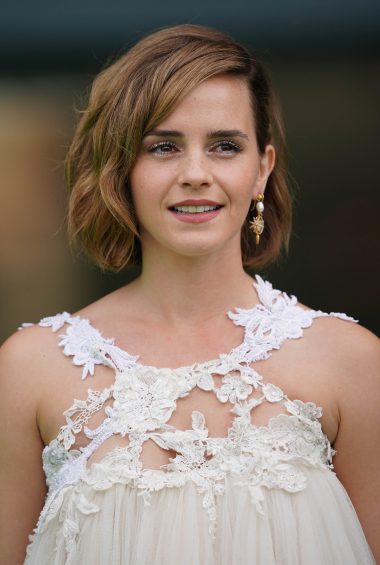 The winners all appeared via video link to give their reaction to receiving £1 million to develop their initiatives by the decade-long award scheme.

In a lighter moment Dame Emma Thompson had trouble with her microphone when she came to the stage to present the award for Build a waste-free world to the city of Milan for its food waste project.

“I broke my mike by dropping it down the lav”.

The event was launched by Coldplay who pre-recorded their performance, which was powered by 60 people pedalling bicycles, and Ed Sheeran later took to the stage to entertain the audience.

Later William spoke to the winners via a video call and flanked by Kate he said: “I am so proud of you.

“Everyone here is amazed by the solutions.

“Real positivity and the fact it is solutions based keeps people smiling and feeling hopeful.”