How many Britons are willing to take a coronavirus vaccine?

Last week Pfizer announced it had developed the first effective COVID-19 vaccine. New research from YouGov shows that two thirds of the British public (67%) say they are either very (42%) or fairly (25%) likely to take the vaccine when it is available, with one in five (21%) saying they are unlikely to get it and 12% are unsure.

These figures are largely unchanged from earlier in November when a different YouGov survey asked about a vaccine more generally. Then, 70% said they would likely take it compared to 19% who said they were unlikely to. 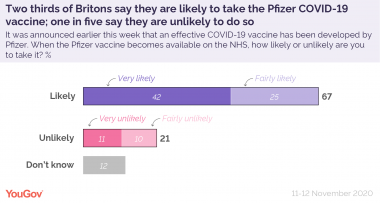 It is important to stress that one in five Britons saying they are unlikely to take the vaccine is not an indication of high levels of ‘anti-vax’ opinion in the country. The data shows that the motivations of this group are more nuanced. 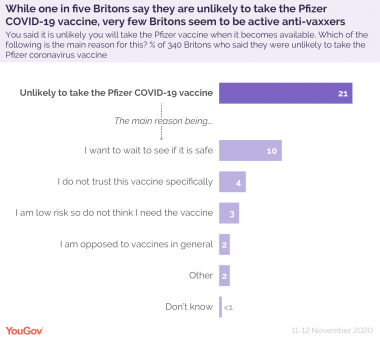 The UK is set to prioritise getting the vaccine to older people and health workers. The YouGov research finds that those aged 65 and over are the most likely age group to say they’ll take the vaccine when available (81%) followed by people between the ages of 50 and 64 (70%).

The main difference in motivation for not taking the vaccine came down to perceived vulnerability. Those under the age of 50 who are reluctant to take the vaccine were twice as likely as those aged 50 and above (18% v 9%) to say it was because they felt themselves to be at low risk of catching the disease, and they therefore wouldn’t need vaccinating.

For their part, those aged 50+ who are unlikely to take the vaccine had a greater tendency than their younger peers (53% vs 45%) to say it is because they are waiting to see if the vaccine was safe. There is no difference in anti-vax sentiment between the two age groups.

See the full results from YouGov by clicking here.