Gardening Time: Go wild for butterflies in your garden

BUTTERFLY numbers are in decline according to a new study, so Hannah Stephenson finds out how to rewild your garden to help these threatened insects.

It’s a worrying reality that many of our native butterflies are fewer in number, as highlighted in a recent study of European species.

The research, published in the scientific journal PNAS, noted that overall numbers have declined by 50 per cent since 1976.

Indeed, seven out of 10 British species of butterfly are declining, many of those very rapidly, and some which were previously common, including grass feeders such as small skipper, common blue, small blue, small copper and small heath, according to the charity Butterfly Conservation (butterfly-conservation.org).

Conservationists believe that rewilding your garden can go some way to stemming the decline, even in a small space.

The charity’s director of conservation Dr Dan Hoare, co-author of the research paper, explains: “Going wild in your garden is absolutely the right approach.”

He recommends these key steps to rewilding your plot to help these beautiful insects thrive once more.

“Put away the mower and let your lawn grow between April and July.”

He concedes that some gardeners who want a neater space will be reluctant to let their beloved lawn grow to huge proportions, but says you can do your bit by just leaving a smaller area untouched.

“Could you leave a patch at the end of the garden to grow longer? Could you leave the edges? I have two kids who want to run around on the lawn all summer.

“I leave a long patch in the centre and then have a doughnut-shaped short bit that I mow and they run around that.” 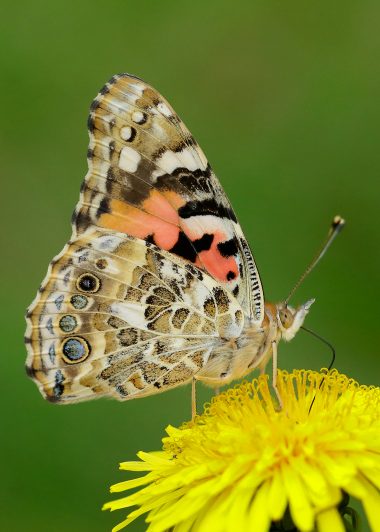 A painted lady butterfly on a dandelion. Picture by Iain H Leach/PA.

Leaving the grass long provides space for the caterpillars of grass feeders like the speckled wood butterfly, meadow brown and gatekeeper.

He says sprinkling wildflower seeds into your wilder lawn could help, but might not even be needed.

“Are you getting clovers, dandelions and bird’s-foot-trefoil in your lawn, native flower plants which will contribute to pollinators including butterflies and bees?

If so, you won’t need to add very much, just maybe scatter some seeds at the end of the autumn after you’ve mowed the grass.”

Go native – “Get as many native plants which grow wild into your garden as you can,” says Hoare. “We have lists on our website (butterfly-conservation.org) you can choose from, but typical plants include bird’s-foot-trefoil, yarrow, clovers, trees and shrubs which are good nectar sources, such as willow and ivy, and blackthorn in your hedge, instead of leylandii or laurel.”

Don’t use pesticides – “Pretty obviously, pesticides are designed to kill insects,” he warns.

“We are putting toxic chemicals all over our gardens, where we’re sitting having a picnic or playing with our kids. In most cases they’re just not needed.

“If you have a healthy ecosystem of insects visiting your garden it should keep the balance of nature going – wasps and ladybirds will eat the aphids,” he says.

Turn your garden lights off – “Light pollution is a huge problem for a whole range of wildlife including moths, bats and birds.

There has been a huge proliferation in LED lights and solar lights which charge up in the day and stay on all night, when you’re not actually using the garden.

“By all means, use lights when you are sitting outside having an evening meal, but turn them off when you come inside. Solar lighting needs to have an off switch.

“Lighting at night disrupts the natural life cycles and rhythms of huge numbers of wildlife. Some butterflies migrate at night but it has more of an impact on moths.

“A lot of insects change their daily patterns of feeding, mating and migrating when they go into hibernation.

“All of those things are determined by the pattern of daylight.

“The same is true for many birds. People in urban areas may have heard robins singing during the night because street lights trick them into thinking it’s daytime, which uses up their energy.

“Moths will get attracted to light sources which stay on all night and they will stay near the light and consequently starve to death because they can’t feed normally.”

Share your efforts with neighbours – “Explain to your neighbours that you’re not neglecting your lawn, you’re rewilding it. I put a little sign on my front gate to explain what we’re doing. I have kids so we painted a sign with bug pictures on it.”

Look beyond your garden gate – “Talk to your council about the way they are mowing their road verges, or talk to your neighbours to scale up.

“If you find what you’re doing in your garden is working, spread the message.”

Nicky Campbell: How my dog helped me through my breakdown

‘Was there life on mars?’ UK scientists play key part in NASA mission to Red Planet