‘GASLIGHT’ is a ‘cop’ show – not as in the cops and robbers sense but a ‘creaky old potboiler’ that rears its head every decade or so.

What made folk have nightmares back in 1934 when Patrick Hamilton’s melodrama/thriller first graced the stage, should surely today be dismissed as more farcical than fearful.

Enter director Stewart Snape who is obviously on a quest to prove that Gaslight can still thrill without the need to drag it into modern day, nor must you pay homage to the era in which it was written, but merely to do the job the writer intended with a team that is up to the task. 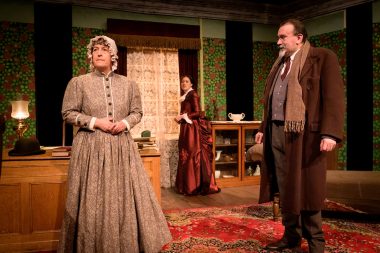 By team, I mean a fusion of cast and creative, which has certainly happened here – resulting in a show, which exudes theatrical excellence.

The excellence begins with the set design from Colin Judges where he has created a Victorian residence in the Ron Barber studio complete with flock wallpapers and tiled floors, a practical fireplace, dark voids where danger lurks and a second floor that isn’t there – yet we look up and see it above the coving that ends in blackness.

Judges’ set is complemented by furniture and properties of the finest detail sourced by a team comprising Andrew Lowrie, Paul Forrest and James Browning

Lynn Hems adds to the realism with her lighting design ensuring that the gaslight lamps dim and glow. They become inanimate cast members, whilst the musical neck-hair-raising soundtrack composed and performed by Brendan Stanley, coupled with haunting sound effects from the desk of Ray Duddin makes for auditory perfection. 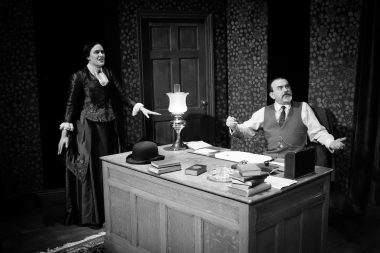 Snape himself gives a master class in theatrical pace. He allows a table to be laid without a word being spoken, content for us to hear the swish of the tablecloth and the chink of china. He allows us thinking time – but when the action hots up he never leaves us waiting for one door to open when another closes – that is a literal. He knows that a dead ten seconds on stage is ten minutes to an audience.  Pace is everything and is the difference between taking us on a journey and sending us to sleep.

Jake Benson makes a good job of playing the iconic baddie as the loathsome, misogynistic Jack Manningham, who is on a mission to drive his poor wife Bella insane whilst the cad himself consorts with music hall artistes and actresses.

Ilana Charnelle Gelbart’s performance as the said Bella is superbly measured – initially she brings an air of dutifully ‘knowing her place’ then adds depth piece-by-piece until she finally springs out of her box like the proverbial Jack. 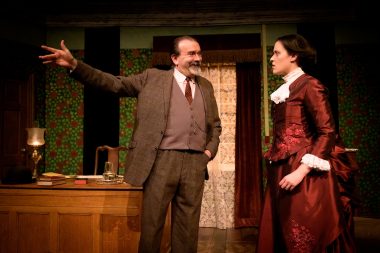 Charlotte Thompson is deliciously naughty as housemaid Nancy who has designs on getting into her master’s pants, whilst Zena Forrest’s silky voice brings comfort through the chaos, making her ideal as the good maid Elizabeth.

Finally to Colin Simmonds as Inspector Rough – he is the real deal in every sense. When Rough asks Mrs Manningham to look him in the eyes and believe him, we do. Simmonds takes us from mirth to melodrama and then back again. His performance is simply a joyous experience.

It’s so pleasant when you are not expecting too much from a show and it turns out to be something special. In summary, ‘Gaslight’ – which could so easily be clunky – is triumphant and gets five well-deserved stars from me.